Stock markets and currencies have fallen across the developing world, confronted by a resurgent US dollar even as the US-China trade war threatens to escalate and central banks in developed countries begin to unwind years of quantitative easing that fuelled a recovery in global growth since the Global Financial Crisis.

Now, fears are growing of the contagion spreading from economies such as Argentina and Turkey all the way to Asia. Amid the negativity, it’s our view that Asia’s emerging markets, particularly those in ASEAN and India, have the capacity to withstand the turmoil and continue to grow.

ASEAN and India have both made significant progress since their respective domestic crises over two decades ago. In India, a serious balance of payments shortfall in 1991 eventually led to the liberalisation of its economy, kickstarting growth that continues to this day. Meanwhile, the Asian Financial Crisis of 1997-98 ravaged ASEAN, forcing the region’s economies to implement wide-ranging reforms that have helped place the region on a sustainable growth trajectory.

During a sell-off in emerging market assets, it’s helpful to analyse some key metrics that help distinguish between the vulnerable and the resilient. Weak economies are afflicted by high twin deficits, significant levels of external foreign currency debt and small domestic capital markets that lead to excessive reliance on foreign funding. Conversely, fundamentals such as favourable demographics, credit growth, healthy levels of local currency debt, functioning legal and regulatory frameworks, robust financial institutions, and an independent central bank are the markers of a strong economy.

Fortunately, India and ASEAN score positively compared to their counterparts in other emerging markets around the world on all these issues. The region’s currencies have also proven to be more resilient to contagion risks than their peers. 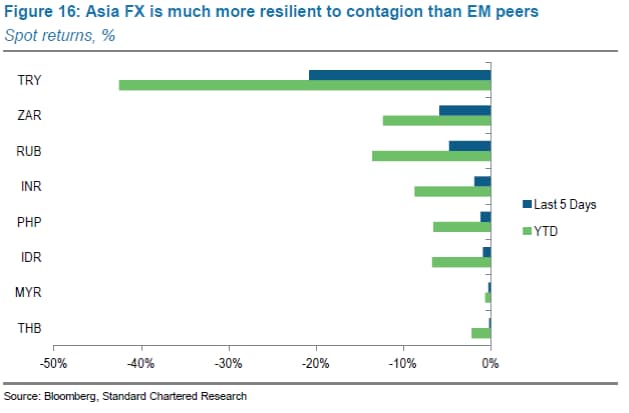 More specifically, India should ride out the current crisis on the back of ample forex reserves cushioning its large external debt. Meanwhile, an independent central bank, with a newly-minted explicit inflation-targeting mandate, should keep inflation in check.

The country has also witnessed major reforms in recent months. While the verdict is still out on the true impact of the demonetisation undertaken in late 2016, the introduction of the Goods and Services Tax, or GST, which seeks to streamline a convoluted, decades-old tax system, will undoubtedly bring significant benefits in coming years.

In the near term, both these measures have held back growth, fuelling some criticism of the government. Regardless, most polls point to Narendra Modi’s Bharatiya Janata Party staying in power — thanks to the lack of a credible opposition — albeit with the help of coalition partners, unlike the historic majority win the party enjoyed in 2014. Reforms like GST are expected to remain in place, because they have the buy-in of a political system that has come to recognise the importance of investor-friendly policies.

Other issues that India has worked to address in recent months include the longstanding blight of non-performing assets and loans at the country’s banks – exacerbated by an overly leveraged corporate sector. New bankruptcy laws and a recapitalisation programme to address bad loans at public sector banks are significant steps. Meanwhile, other long-term challenges such as job creation and the expansion of its manufacturing base need to be addressed.

Meanwhile, ASEAN continues to outperform global growth, albeit at a slower pace than before, as it continues to be hampered by an investment overhang fuelled by the commodities boom of recent years. We expect the region to grow at a rate of 5.2 per cent this year. At the same time, the region is working to attract a bigger share of the higher-value-added manufacturing business from the world.

Indonesia, ASEAN’s largest member nation, boasts healthy fundamentals. And, despite the IDR underperforming other currencies in the region, the country’s institutions are making a concerted effort to address any weakness, enabling the economy to fend off contagion risks.

In the Philippines, the fiscal deficit (at approximately 3 per cent of GDP) and the current account deficit (approximately 1 per cent of GDP) are not high enough to be of concern. The central bank has taken strong measures to try to contain inflation; combined with healthy growth led by increased infrastructure development and limited foreign participation in the bond market. The country is fairly well-shielded from external shocks.

Across the rest of ASEAN, while the region’s economies could be expected to experience short-term spasms of weakness, strong domestic institutional frameworks and healthy fundamentals should help withstand the ill winds blowing across other emerging markets.

While the risk of a full-blown trade war is still uncertain, there is always potential for escalation. Its impact features high on the list of concerns for many businesses, especially in Asia’s manufacturing hubs of China, Singapore and Taiwan.

Taking the worst-case view, if US-China trade grinds to a stop, China could suffer economic losses of as much as approximately 3 per cent of GDP while the US could be hit for approximately 1 per cent of its GDP. In such an event, ASEAN countries, especially Malaysia, Singapore and Vietnam, will be affected as significant portions of their exports to China eventually find their way to the US. However, some of the affected countries also stand to benefit if they can effectively step in to fill the gap in exports left behind by a tariff-hit China. Still, final demand loss from a protracted trade war will adversely affect global growth.

ASEAN and India stand apart from emerging markets in other parts of the world because of their domestic strengths, such as their awareness of and preparedness to deal with external shocks, the independence of their financial authorities and their ability to act decisively.

These economies also benefit from solid fundamentals such as manageable inflation, higher real interest rates, and sufficient forex reserves providing a buffer from external vulnerabilities. While it’s important to recognise that no economy can be totally impervious to global risks, and investors should rightfully remain cautious in these uncertain times, ASEAN and India offer plenty of reasons to be positive.