What do buildings, bridges, ships, trains, cars, wind turbines and surgical equipment have in common? They are all made with steel—one of the most carbon-intensive heavy industry products and a critical piece of the net zero emissions puzzle.

The iron and steel sector is the single largest source of industrial process heat, accounting for around 7 per cent of global emissions.1 With demand forecast increase by more than a third by 2050, the industry must halve emissions if the world is to meet the goals outlined in the Paris Agreement.2 Nowhere is the need to act more important than China.

China produced nearly 56 per cent of global crude steel in the first quarter of 2021.3 Steel comprises around 15 per cent of the country’s greenhouse-gas emissions,4 thus decarbonization is vital for China to achieve its target of carbon neutrality by 2060. While the impetus for change is growing, the road ahead will be bumpy. 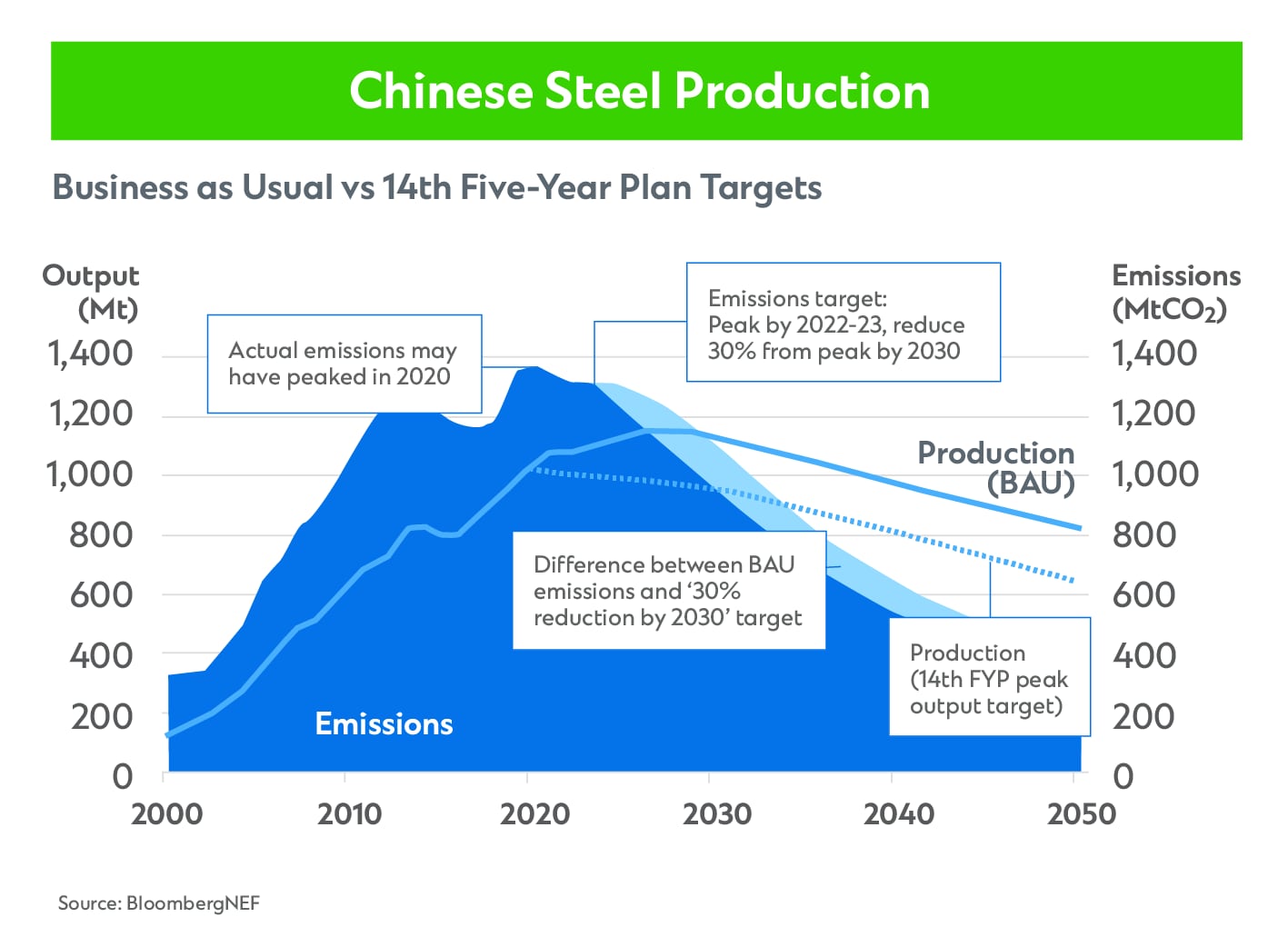 The Challenge of Change

Decarbonizing China’s steel sector will not be easy.

“The development of China’s steel industry reflects the overall economic growth of the country”, Yu Yong, Chairman of HBIS as well as the World Steel Association, said in a recent media interview. 5 “It took decades to get to where we are now – steel has supported the rapid growth of China’s industrial manufacturing; however it reached a turning point in 2006 when steel was oversupplied and steel prices slumped,” Yong said. “This has pushed steel producers to transform from volume-driven to quality-and-technology-oriented growth.”

The prevailing method of production exacerbates the challenge. Currently, 87 per cent of China’s steel production capacity uses BF-BOF process6 which generate approximately four times more carbon dioxide than the electric arc furnaces (EAF). By contrast, EAF is charged with scrap steel, which achieves material efficiency by saving the energy-intensive sintering and coking process. EAF can replace coal with hydrogen as the reduction agent to avoid carbon during the production process. Producers can also power EAFs with clean sources of electricity and install carbon capture and storage (CCS) systems. 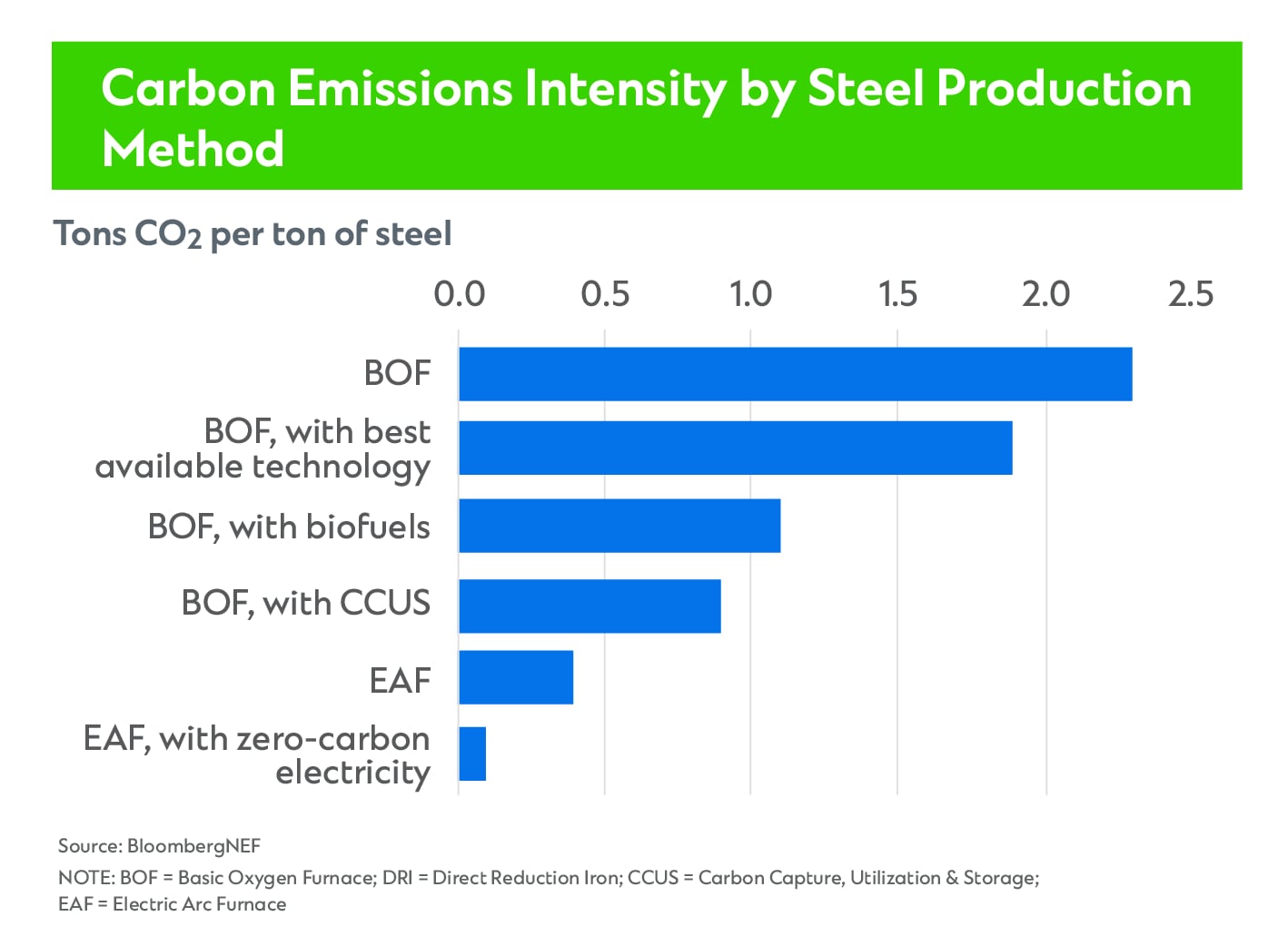 Improving process efficiency and increasing steel recycling are the most viable near-term steps towards decarbonization, but these could only reduce around 20-30 per cent emissions. To achieve neutrality, we need technological innovations such as hydrogen-based Direct Reduced Iron (H2 DRI-EAF) and iron ore electrolysis. There are some pilot plants running up in Europe as well as China, but achieving large scale commercial production would take some years. These innovations require a combination of innovation and political will.

While China has not yet published official targets for the steel industry following its 14th five-year plan, various reports on the drafting of a national steel plan indicate that the country may cap crude steel output and capacity at one billion metric tons, target peak emissions before 2025 and cut emissions by 30 per cent from the peak by 2030.8 Industry consolidation will also play a crucial role in decarbonization. The government aims to ensure that the country’s ten largest steelmakers account for 60 per cent of production by 2025.10 This will increase negotiation power over raw materials suppliers and strengthen emissions management practices.

While Europe leads the way on decarbonization efforts across industry and many other areas, China has the potential to catch up quickly. What makes China unique is its top-down approach to achieving carbon neutrality thanks to the national level neutrality pledge. This is starting to take root with industry players, too.

China’s largest steelmaker, Baowu announced in January its commitment to achieve carbon neutrality by 2050, ten years earlier than the Chinese government’s national target.11 This set a precedent for the industry. In March, China’s second largest steelmaker, HBIS, followed suit.12 Angang and Baogang have also publicly announced decarbonization pathways that are broadly in line with the Paris Agreement. 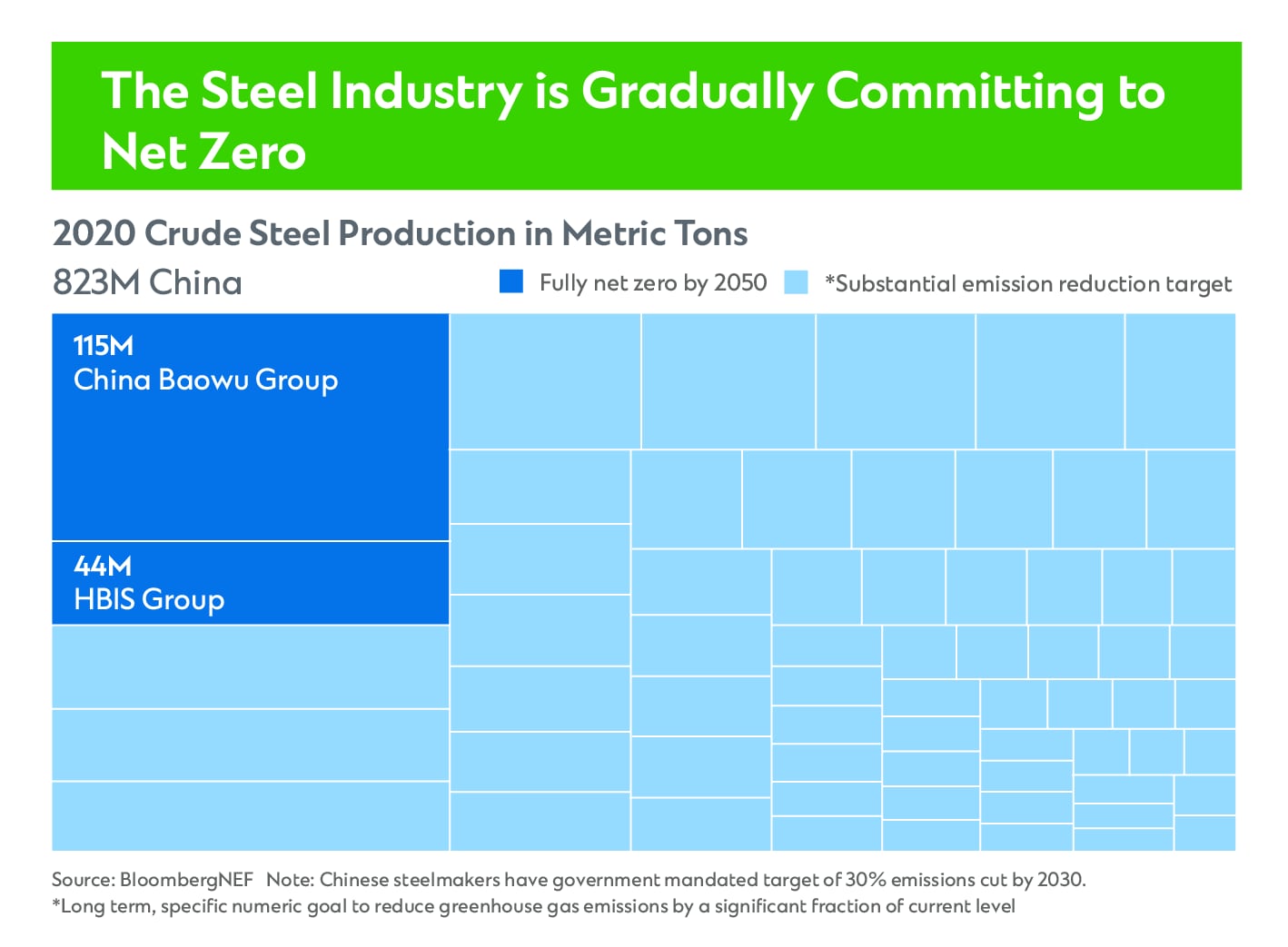 HBIS also partnered with Tenova on the world’s first direct-reduction iron production plant powered by hydrogen-enriched gas, the aim of which is to replace coking coal with green hydrogen.14 These initiatives could pave a pathway for the rest of the country’s steelmakers to follow.

While challenges loom large, several advantages could facilitate the decarbonization of China’s steel industry. Among them are the country’s leading position in nuclear power and solar panel technologies.

To achieve its goal of increasing the share of non-fossil-fuel energy sources to 20 per cent by 2025, China will promote the construction costal nuclear power plants.15 It aims to have 70 GW of generation capacity within five years, up from 50 GW at the end of last year. That includes the promotion of technologies including modular small-scale reactors and offshore floating nuclear reactors, both of which could provide clean power for EAFs in steel plants. 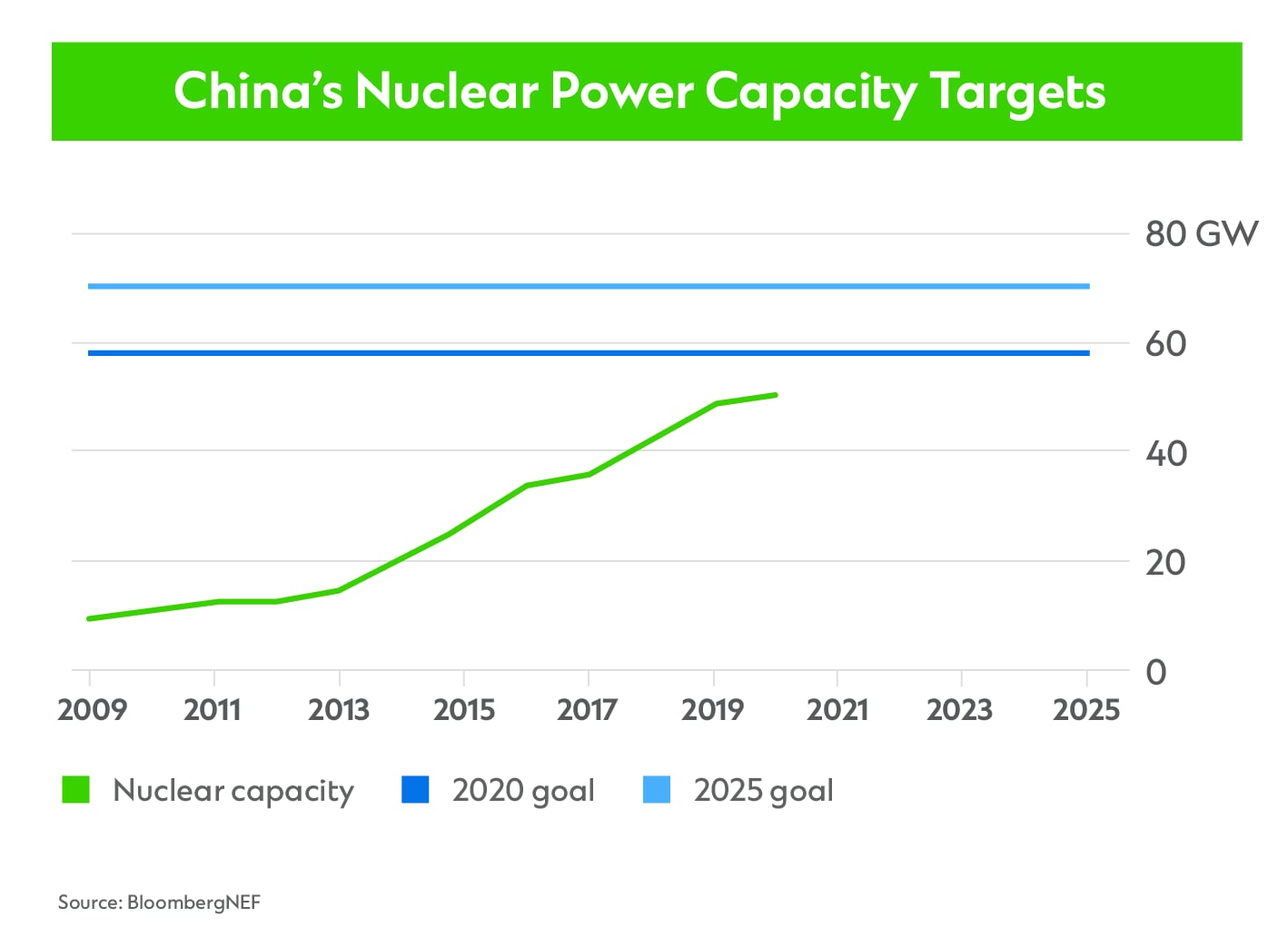 Meanwhile, ultra-high-voltage power lines could transmit wind and solar power from west China to the east coast where majority of steel plants are located. China added 120 GW of wind and solar capacity last year. It is forecast to add another 81-94 GW this year, potentially accounting for 12 per cent of total power generation.16 With an 80 per cent share of the global solar market, China benefits from a massive reduction in unit costs that could make renewables an affordable source of clean electricity for heavy industry.

As installed capacity increases, production costs decline, and renewables become a central part of China’s energy mix, steelmakers and other heavy industry sectors will find new opportunities to reduce emissions. The sooner it happens, the more likely we are to achieve the emissions reductions targets laid out in Paris.