Climate change doesn’t recognise international borders, so a global approach is needed to reduce industry emissions – and the metals and mining sector is no exception.

Tackling downstream emissions is therefore critical if the sector is to reduce its global emissions impact. Technologies such as carbon capture and storage (CCS), which collate  CO2 emissions from heavy industry processes before they reach the atmosphere, are often hailed as the key to a more sustainable future. The benefit of CCS is, however, dependent on whether it is embraced by countries like China – the mining industry’s main greenhouse gas contributor.1

This article explores the state of CCS today, the role of China, and how the US’s policy landscape has turned it into a leader in carbon capture project development.

Reaching net zero will be virtually impossible without carbon capture, utilisation and storage, according to an IEA report2 looking at the technology’s role in the energy transition.As the use of coal in power generation, steel and aluminium production is unlikely to drop dramatically anytime soon, scaling up the global adoption of CCS projects offers a way to reduce emissions from combusting coal and other fuels.

Carbon is captured as a gas either before or after combustion, then compressed for transportation. Today, the most common use of CCS is by oil companies as part of  enhanced oil recovery (EOR) projects.

While the world’s carbon capture capacity is increasing, it is not increasing at a fast enough rate to meaningfully impact climate targets. The Global CCS Institute’s 2020 report3 records 26 operating CCS facilities with 40 million metric tons per annum (Mtpa) of total capture capacity, which is growing annually by around 5 per cent. Global capture capacity would need to increase at 100 times this rate to stay within the Intergovernmental Panel on Climate Change (IPCC) 1.5-degree climate target, the report predicts.

Digging in to net zero

Watch the film
"
To read our e-magazine on sustainable finance, click here

While carbon capture technology could help reduce environmental costs, scaling up CCS projects doesn’t come cheap. The cost of capturing, transporting and storing CO2 are largely driven by the carbon intensity of specific projects and industries. 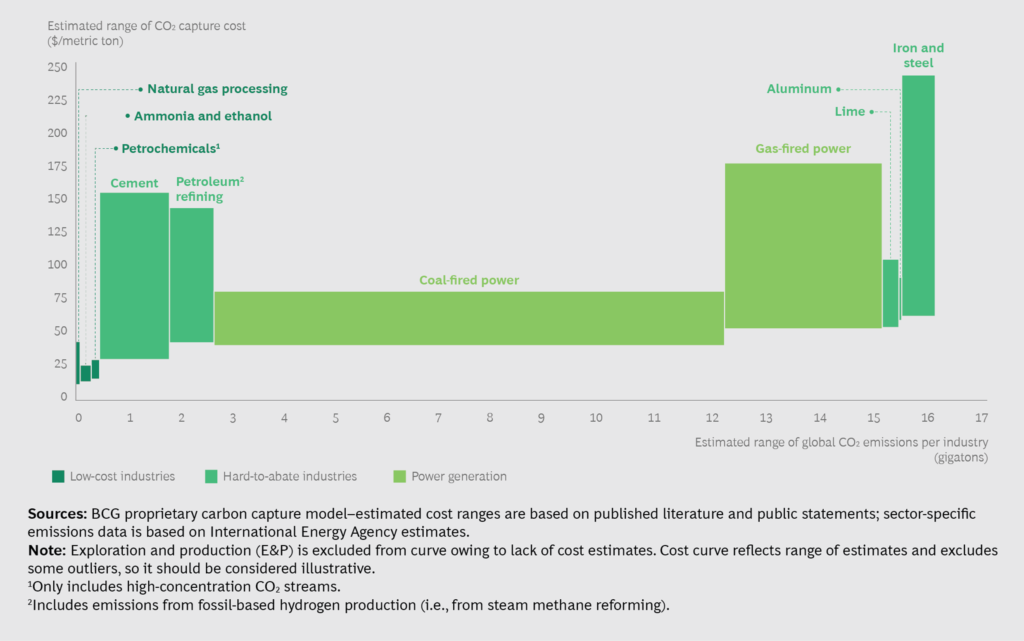 A model developed by Boston Consulting Group shows how the range of capture costs differs across high-emitting industries, like coal-fired power generation and iron and steel making. As the graph shows, for many high-emitting sectors adding the incremental CCS costs to their existing operating costs would not be viable.

In addition, the average cost of transporting each ton of carbon is between $0.50 and $3 for each 100km, and storage costs average between $1 and $30 per ton.

Looking ahead, scaling up CCS adoption should bring costs down, much in the same way that mass take-up of solar and wind power saw costs moderate, potentially making capture technology viable for industries like steelmaking, especially in localised steel clusters. But the power-generating sector could struggle with the high costs of retrofitting facilities with CCS, compared with switching to relatively inexpensive renewable energy alternatives.

The case of China

Coal is still king in China, a country that consumes more coal than the rest of the world combined, and produces half of global steel output.

Despite generating 28 per cent of the world’s total greenhouse gas emissions, China has fewer carbon capture projects than North America, the Middle East and Europe. For the global mining industry to reduce its carbon footprint, this has to change.

A shortage of underground storage for captured carbon in China seems unlikely,4,5 given its vast size and many areas with potentially suitable geology6.

Consistent data is unavailable, but a look at China’s major geographical basins suggests that the number of potential sites are plentiful and are certainly not an inhibiting factor for CCS use in China.

While sites would need to be near to the country’s main power and steel smelters, and linked to pipeline networks, carbon capture appears a highly workable solution for this industrial powerhouse.

Why the US leads the way

Of the 17 new CCS projects that launched in 2020, 12 of them were located in the US as policymakers set a framework to encourage growth.

The 45Q federal tax credit incentive was a major CCS kickstarter, offering payments of $35 for each ton of CO2 used, and $50 for each ton permanently stored below ground.  Commercial facilities in the US also have access to CarbonSAFE storage hubs, supported by the US Department of Energy, which help attract investment by de-risking new projects.

In contrast, China’s policy framework is only just beginning to identify value in CCS growth. Academic Kai Jiang7 argues that the absence of an enforceable legal framework, insufficient data for operating projects, weak market stimulus and few, if any, financial subsidies have produced low CCS take-up by Chinese companies and little understanding of what the technology can offer.

But, alongside the growth of renewable power and greener infrastructure projects, commentators see an increasingly important role for CCS if China is to meet its commitment to reach net-zero emissions by 2060.

Environment and climate are becoming hot topics for the country’s policymakers, and efforts to lower emissions could see the Chinese emissions trading system ramped up, a topic covered in more detail in the third article in this series.

Accelerating CCS take-up will be critical

While it’s important to reduce the metal and mining sector’s upstream emissions, those created by the downstream dwarf these by comparison, which creates a major challenge for the industry.

Much of the steel and power sectors operate at low margins and adding costs to the production process could make them unviable.

One solution is for miners to partner with key customers to support efforts to cut the industry’s carbon footprint with technologies like CCS. The banking sector certainly has a role to play in assessing financial models and supporting collaboration and a clustered approach to carbon capture projects.

The impact on global emissions of greater CCS adoption in China cannot be underestimated, and there are encouraging signs of increasing cooperation between miners and steel majors. Expanding these partnerships to include the country’s national oil companies and owners and managers of potential carbon storage locations could boost uptake of this much-needed technology to curb the country’s, and consequently the planet’s, emissions.

The final part of this series looks at the role of an effective offset market in the metals and mining industry’s efforts to reach net zero.

1 S&P emissions tool suggests that China accounts for ~28 per cent of metals and mining’s total emissions. However, this is at the low end of estimates. Our own model suggests >35 per cent, driven by China’s domestic coal mining and power industry, and global share of steel production