The mining industry is facing a dilemma.

While mined materials underpin much of the technology at the heart of the energy transition and demand for metals and minerals is set to increase, the industry also needs to reduce its carbon footprint. The mining sector’s environmental impact influences how society and, increasingly, investors view the industry1.

Mining majors have responded to the challenge by publishing comprehensive reports documenting what they are doing to embrace the sustainability agenda. Some have announced net-zero commitments.

While approaches differ, there is common agreement that resolving this dilemma is vital.

This is the first of three short articles taking a deep dive into the critical factors that enable a miner to achieve net zero, whilst delivering the increased output needed to support the energy transition.

Digging in to net zero

Watch the film
"
To read our e-magazine on sustainable finance, click here

Mining is a power-hungry business and most of the industry’s direct and indirect emissions are produced by the diesel and power that keeps mining operations2 working.

By analysing the emissions curve of major nickel, copper and iron ore mines around the world, we can identify what is driving carbon emissions and the actions miners need to take to curb them.

The data, insights and conclusions of a study supported by Skarn Associates, make for interesting reading. The Skarn curve shows emissions from copper production up to the point of sale. This includes direct emissions from mining activity (known as Scope 13) and emissions from generating electricity, which is purchased and used by the mine (Scope 2), as well as some other indirect emissions linked to a mine’s extended operations to prevent the data being skewed4.

Most of us flick a switch and expect a light to come on, with little thought of where the electricity that makes it happen comes from or how it is produced. But how the power used by mining operations is generated can be a major factor in the total emissions they produce.

The electricity used by a mine site generates about five times as much CO2 as using diesel vehicles, according to McKinsey5. So using clean electricity from sustainable sources, and using that energy more efficiently on site, could go a long way to both reducing a mine’s energy needs and its carbon footprint.

Panning out to look at the global picture, Chart 2 shows the source of the grid electricity that powers copper producing countries around the world, which in some regions is heavily reliant on fossil fuels, particularly coal. Mine owners with assets connected to renewable grids, such as Zambia, DRC and Finland, enjoy less carbon-intensive mining operations, while countries with a fossil-fuel-heavy energy mix produce more emissions.

The transition to sustainable mining is more challenging and more expensive for operations in countries where the grid has a higher emissions intensity. Here, miners need to rethink where and how they source power, and consider mining process improvements that save energy, using carbon capture technologies to prevent CO2 reaching the atmosphere, or adopting carbon offset solutions.

So, how does a copper mine’s emissions affect the value of its assets?

Traditional valuation models are based off a Net Asset Value assessment. They take into account a mine’s cost curve, the grade of its mined products and the levels of reserves held, but adding its emissions profile into the mix presents a different view of asset worth.

The dark blue dots shown on Chart 3 represent Central African copper assets, which have low carbon intensity compared to mines in many other parts of the world. Although these assets are generally higher on the Wood Mackenzie cost curve than European and Latin American assets, when carbon intensity is added to the mix, their relative position improves. For assets that rely on coal-fired power, the opposite is true.

Standard Chartered has evolved the traditional grade-reserve-cost valuation method and built in various carbon cost scenarios, to gain a true picture of asset worth. This approach helps inform investments in power and operation improvements, as well as net zero-focused acquisition and sales strategies. 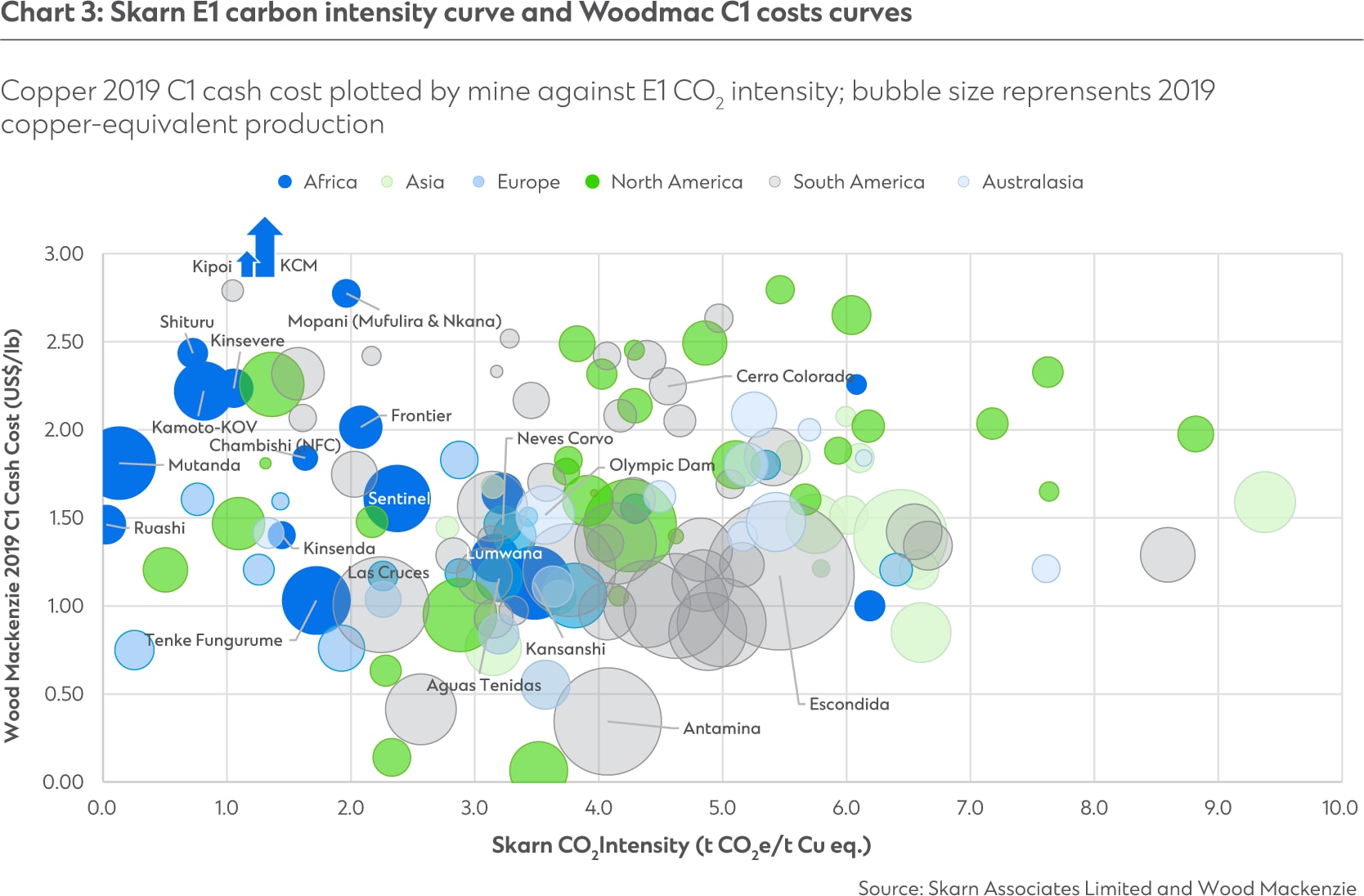 The road to net zero

The climate change agenda impacts every facet of industry and the mining sector is no exception.

Greater appreciation of the need for change is permeating the industry and the appearance of emissions-cutting technological advances should provide opportunities for miners to further reduce their direct and indirect emissions. Looking to the future, feasibility studies for new mines or the expansion of existing ones, should price in the impact of emissions on a mine’s approach to sustainability.

As with many hard-to-electrify heavy industries, some mining process emissions are difficult to eradicate entirely, and some parts of the energy mix are beyond a miner’s direct control.

While process improvements can make a mine more energy-efficient, they can only go so far. But game-changing advances in carbon capture technologies could help put the mining industry on the road to net-zero emissions. These, along with the importance of China, are discussed in the second article in the series.

2 It is understood that in coal mining, the release of fugitive methane during mining has a significantly bigger impact than diesel and electricity combined. This is touched on in the Carbon Capture and Storage article.