Social-minded investors are putting money into sustainable assets such as ESG-tilted funds and renewable energy investments amid the COVID-19 pandemic, furthering a trend that will play an important role in shaping a green recovery and the future of finance.

Lockdowns and stay-at-home orders, aimed at curtailing the pandemic, brought business to a standstill in the first half of 2020, putting the global economy on course for its worst downturn since the Great Depression. As companies make tough decisions to limit their losses, socially responsible investors are expanding their purview to include worker welfare alongside their  climate change and environmental concerns.

Recent focus on worker welfare is part of a  wider focus on investments that consider the impact  companies have on their employees, the local community and society in general. Globally, the share of retail and institutional investors that apply ESG principles to at least a quarter of their portfolios rose to 75 per cent in 2019 from 48 per cent1 in 2017. 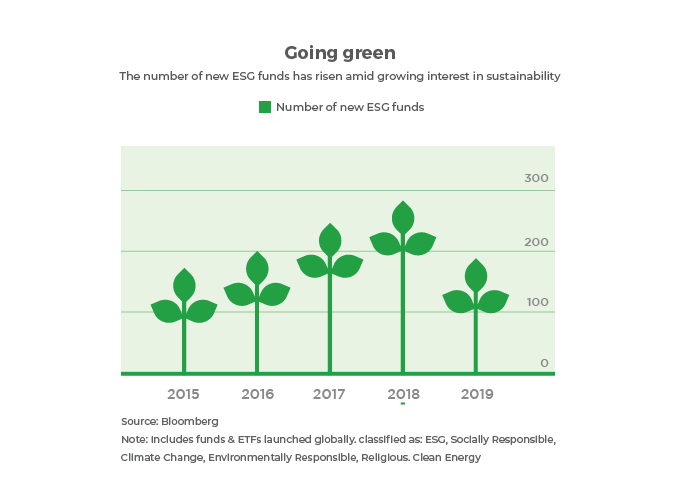 “That ESG funds have outperformed both on the way down and on the way out of the initial market correction highlights that there is a growing risk around not being ESG-aligned or sustainable-finance aligned,” says Daniel Hanna, Global Head of Sustainable Finance at Standard Chartered. “I expect that investors will increasingly consider the impact of ESG and climate change on their portfolios; whether it is from physical events such as more frequent extreme weather or the potential impact on valuations from the transition towards a greener and fairer economy”

Profit with a conscience

While the drive to support companies that make a positive impact is strong, profit remains an incentive. Here, too, ESG investments deliver. A study comparing more than 10,000 funds between 2004 and 2018 showed that sustainable funds had 20 per cent less downside risk than traditional funds and were more resilient during periods of market turbulence including the global financial crisis.2

That was also the case in the first quarter of 2020 when the pandemic sparked a rout in global financial markets. Around 94 per cent of sustainable indexes outperformed traditional indexes during the pandemic-led market downturn. Many of those indexes continued to outperform during the rebound that followed, with 70 per cent of sustainable funds in the U.S. in the top halves of their Morningstar Categories at the end of May3.  Meanwhile, exchange-traded funds focused on companies with above-average grades for ESG practices attracted more than USD10 billion in the first four months of 2020, more than all of 2019 combined.

Climate change and enabling clean and affordable energy remain key areas of focus among social-minded investors alongside health, wellbeing and education, according to the Standard Chartered Sustainable Investing Review 2020. That concern is reflected in investor initiatives such as Climate Change 100+, which aims to push the world’s largest corporate greenhouse gas emitters to curb their emissions4, underscore the need to facilitate the clean energy transition, especially amid the COVID-19 pandemic.

The case for a green recovery

One silver lining to the recent slowdown in economic activity is that carbon emissions are on course to post their largest annual decline since World War II5. That drop comes at a critical moment in the battle against climate change. Scientists have warned that global greenhouse gas emissions must decline 7.6 per cent each year from 2020-2030 to achieve the Paris Agreement goal of limiting the rise in global temperatures to 1.5 degrees Celsius.6 Failing to do so would put us on course to experience some of the worst impacts of climate change.7 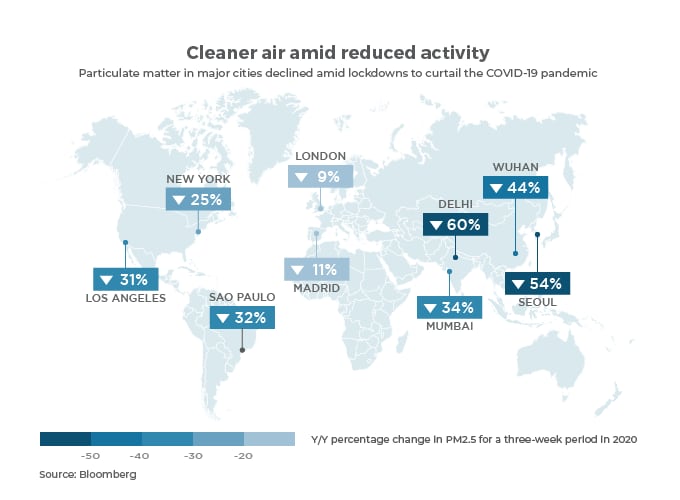 Recent declines in carbon emissions will prove short-lived once economic momentum picks up, as was the case following the global financial8 crisis. To prevent a climate catastrophe, governments must pursue a green recovery built on renewable energy and sustainable infrastructure. Doing so could spur global GDP gains of USD98 trillion and create 42 million jobs by 2050.9 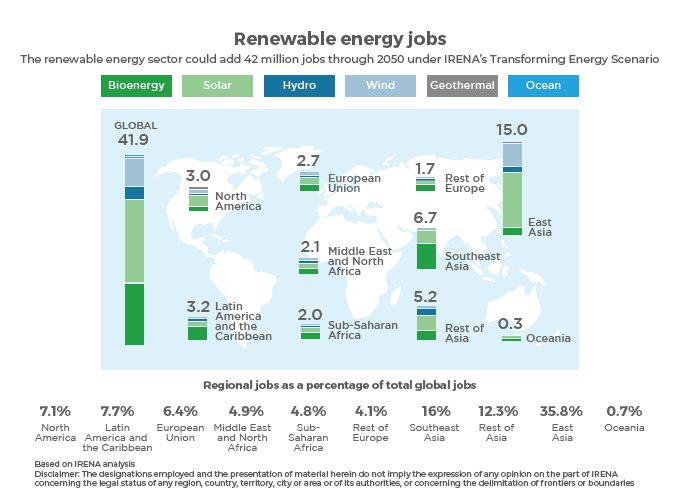 A group of companies including H&M Group, Bayer and Vodafone that are worth a combined USD2.4 trillion signed a statement in May calling for a green economic recovery grounded in bold climate action aligned with the latest climate science. The goal: shape a recovery that will help the world reach net-zero emissions well before 2050.10

“We’re seeing the switch to a green recovery accelerate, but we have to ensure that it happens in emerging markets, which have the greatest potential for green investment but also face the biggest risk from climate change,” Daniel says. “One of the issues we’ve seen in emerging markets is a pullback in capital. Collectively, we need to ensure that markets that can leap-frog to new low-carbon technologies do so.”

The International Monetary Fund has also called for a green recovery, outlining policy measures that would fight climate change while bolstering the global economy. Those include prioritising green financing, building green infrastructure and adopting ambitious medium-term climate plans.11 While many governments remain focused on containing the pandemic, some are already positioning for a green recovery.

The European Union, for instance, is poised to transform its Green Deal strategy to reach net zero emissions by 2050 into a green recovery package. That will include investments in electric vehicles, hydrogen infrastructure and 7.5 GW of renewable energy projects over the next two years12. In the UK, the Labour Party is drawing up a recovery plan to retrain the 600,000 young people who could lose their jobs13 to work in green industries. That would build on Labour’s existing plan to achieve a zero-carbon economy by 203014. By contrast, the U.S. government has not yet indicated whether it will pursue a green recovery. 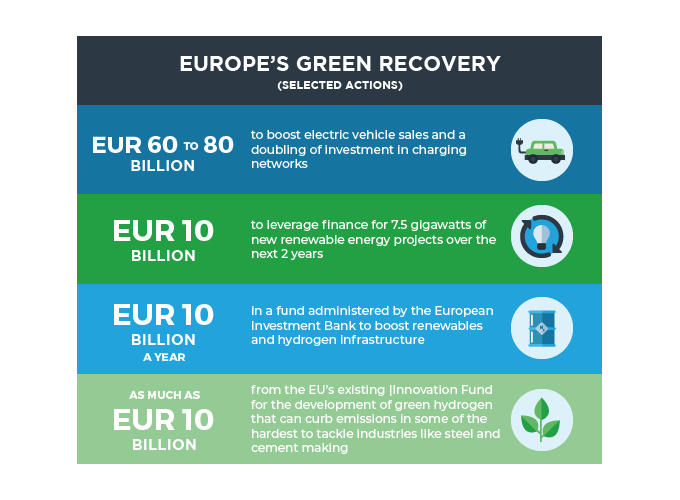 In Asia’s emerging markets, Malaysia announced a stimulus plan that includes USD2.9 billion for rooftop solar panels and LED street lighting, while15 the Philippines Central Bank approved a Sustainable Finance Framework to support the renewable energy transition in the wake of the pandemic.16 China will spend an estimated USD205 billion in seven infrastructure sectors including railways and data centres which aren’t exactly green but underscore its desire to find less carbon intensive growth drivers.17 In Africa, the African Union Commission and the International Renewable Energy Agency will collaborate to advance renewable energy to bolster the continent’s response to the pandemic.18

Rising public debt, reduced exports and capital outflows could make financing a green recovery more challenging in many emerging markets.19 Expanding initiatives like The Equator Principles – an environmental and social risk management framework chaired by Standard Chartered and adopted by more than 100 international financial institutions – would ensure financing for sustainable activities that do less harm in emerging and developed markets alike.

“The fact that the EU has made driving a green recovery a policy item is really positive,” Daniel says. “But the EU is only responsible for 10 per cent of global emissions. We’re really focused on ensuring the same passion and energy exists in emerging markets. That’s why we’ve committed more than USD35 billion to funding clean tech with a focus around emerging markets and a further USD40 billion for sustainable infrastructure over the next five years.”