Hydrogen holds tremendous promise as both a source of clean energy and a way to decarbonize hard-to-abate industries, yet current production methods rely almost entirely on coal and natural gas. Therein lies a paradox: Before hydrogen can contribute to a cleaner world, first we must clean up production.

To decarbonize the global economy and meet climate targets, the world needs a clean molecule. Hydrogen is that molecule. It’s versatile, reactive, storable, transportable, clean-burning and can be produced with low or zero emissions. With the right level of investments, hydrogen could meet 24 per cent of global energy needs by 2050, putting the world on course for a 1.5-degree scenario.1

“What’s special about hydrogen is that it's very versatile,” Galid Lahdahda, Managing Director, Global industries Group, Oil & Gas and Chemicals at Standard Chartered. “It’s a store of energy, it can link energy chains—it’s really an enabler that can improve energy system efficiency and extend the use of modern technologies.” 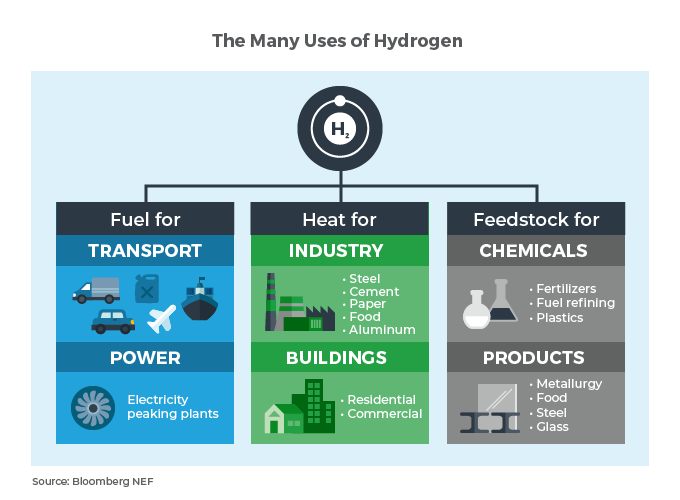 The use cases are far-reaching. In 2019, power and heavy industry accounted for around 60 per cent of emissions from existing infrastructure.2 Here, hydrogen offers ways to decarbonize notoriously hard-to-abate industries including steel, chemicals, cement and long-haul transport. It can bolster renewables like wind and solar by covering intermittency when supply falls short of demand. It’s even one of the most promising options for storing and transporting electricity from renewables. Yet, for all of its potential, the signs of scale-up are still not there. Production is far from cost-competitive, and policy support remains insufficient. In order to become a mainstay in the energy space, hydrogen must overcome a number of familiar challenges.

Hydrogen is already widely used in some industries. Several technologies available today enable hydrogen to produce, store, move and use energy. While hydrogen remains one of the most viable alternatives for a range of applications, scaling up existing technologies to deliver competitive low-carbon solutions requires around USD280 billion worth of investment and USD150 billion worth of subsidies by 20303.

“Hydrogen requires an entire ecosystem,” says Sujay Shah, Managing Director and Global Head of Cleantech Coverage at Standard Chartered. “It's not enough for policymakers to incentivize production, you also need to be able to transport and store hydrogen. We must step back and ask whether we’re making the right investments in industrial ports, storage infrastructure, fuel-cell technology and more. There are various angles that need to be thought about in a very holistic manner.”Putting the proper supply infrastructure in place by 2050, for instance, would require USD11 trillion worth of investment. That spans everything from boosting electrolyser capacity and building large-scale supply and distribution networks to advancing fuel-cell technology and installing refuelling stations.4

The development of the hydrogen ecosystem has been slow. Much of that comes down to policy and funding. While industry and financial players are keen to invest, they require clarity on policy direction before they will commit. Progress requires planning and coordination among governments, industry and investors to ensure that hydrogen-related projects warrant the investment that they require. “For investors, it’s not just about production,” says Andrew Nelson, Director, Cleantech Coverage at Standard Chartered. “There must be a clear use of hydrogen offtake that’s signed into a long-term contract. You need to have all the infrastructure in place, you need the licenses around shipping, the contractual structures at different parts of the value chain and well-established equipment providers that can service these projects over the longer term. Those are some of the most important aspects for a bankability assessment.”

Hydrogen has experienced a hype cycle previously, only to fall by the wayside. This time, growing policy support and declining costs could provide the momentum required. “We've seen the impetus pick up over the last year driven by two things,” Andrew says. “One is policy. That’s coming through recent stimulus packages to bolster the global economy, while the oil price crash has accelerated the transition among oil companies that can play a role. The other is that hydrogen was already gaining traction in certain parts of the world such as Australia and Japan, which has created a global race to secure first-mover advantage and become the market leader across the hydrogen value chain.”

The number of countries with policies that support investment in hydrogen is increasing, albeit at a slower pace than is required. In 2019, the International Energy Agency counted 50 targets, mandates and policy incentives in place that directly support hydrogen.6 The bulk of those focused on transport. Meanwhile, the European Commission plans to increase its ability to produce renewable hydrogen six-fold by 2024 through hundreds of billions worth of investment as part of its green economic recovery plan.7

The declining costs of renewable power sources such as wind and solar may be another catalyst. Wind and solar are now the cheapest sources of new power capacity for two-thirds of the world’s population.8 As prices continue to decline, the cost of producing hydrogen from renewable electricity—green hydrogen—could decline 30 per cent or more by 2030.9 In a best-case scenario, hydrogen could become cost competitive with the current wholesale price of natural gas in Brazil, China, India, Germany and Scandinavia by 2050.10 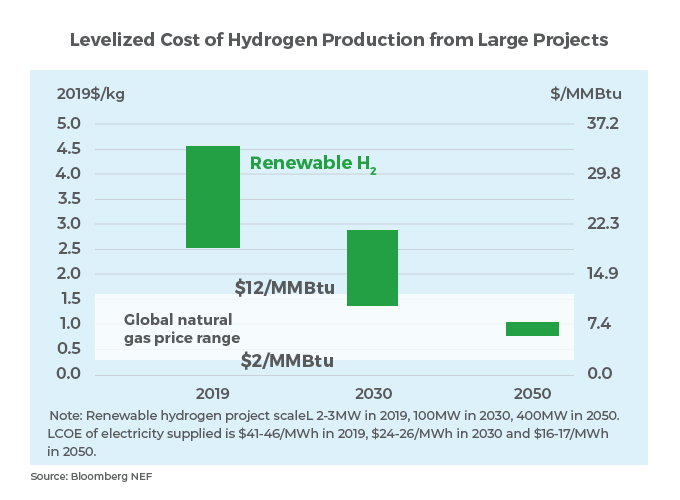 “We need the right policies for investment to take place,” Galid adds. “Investment will drive costs down and make hydrogen more entrenched as a technology. We’ve seen a lot of encouraging news and commitments from governments recently, which suggests we’re progressing. The outlook for hydrogen as a result has improved materially since 2019 and a hydrogen future might be nearer than we think.”