Please be aware of the DYRE malware and associated variants targeting our online banking customers.
Click here for further information.

Mrs. Mansa Nettey has more than 19 years of experience in banking, having held various senior roles in Corporate and Institutional Banking in Standard Chartered including managing across the West Africa sub-region.

In her most recent role as Head, Financial Markets, Ghana, Mansa provided strong leadership in building and overseeing key strategic relationships for business success and growth.

Mansa holds a Bachelor of Pharmacy Degree from the University of Science and Technology, Ghana and a Masters in Business Administration from Manchester Business School in the United Kingdom.

He is responsible for providing leadership and plays a critical role in the delivery of financial controls and maintenance of high standards in finance and regulatory reporting in addition to tax risk management of the Bank. Kweku has a strong finance, regulatory and audit back-ground. He was the bank’s Financial Controller from June 2009 till August 2015. Prior to this, Kweku held various positions including Regulatory Reporting Manager and Financial Controls Manager.

Before joining the Bank in 2005, Kweku worked with the Banking Supervision Department of the Bank of Ghana for a period of eight (8) years as a Bank Examiner. He was also trained as an auditor with Deloitte and Touché

He is a Chartered Accountant by profession and holds an Executive MBA in Finance from the University of Ghana Business School, Ghana.

Xorse previously served as Country Head of Global Banking. Xorse is in his seventeenth year with the Bank and has worked in various roles in a number of geographies. He has rich experience in client coverage having worked as Director, Global Corporates, London between 2006 and 2010.

He was in charge of the Bank’s coverage of commodity and agri-business clients in our footprints in Africa between 2013 and 2015 and was based in South Africa. He also previously held senior roles in Corporate and Institutional Clients business in Ghana.

Setor joined Standard Chartered as a Management Trainee and 18 years on has vast banking experience from branch banking as a sales consultant, Customer Services Manager and branch management.

Setor is a graduate of KNUST, and also holds a post graduate degree from University of Leciester, UK.

Kwame is a graduate of KNUST, Ghana and holds a postgraduate degree from the University of Leicester, UK.

Gifty was appointed Head, Human Resources, Ghana on 1st December, 2016. Prior to this role, Gifty was the Senior HR Business Partner for Retail Banking and Information Technology & Operations for Ghana.

Gifty joined the Bank in 1997 as a Graduate Trainee, and has a proven track record of over 18 years experience in Standard Chartered Bank, having worked in Branch Banking, Channels Management, Products and Human Resources.

Gifty is a Chartered Member of the Chartered Institute of Personnel and Development, UK, and holds a Post Graduate Degree in Human Resources from the University of Ghana, Legon.

Sheikh has 22 years of banking experience at global, regional and country level across banking technology and operations, operational risk management, Financial Crime Risk Management, Compliance, Audit and Branch banking. These included positions held as Global Head, Lending Operations and Technology based in Singapore between 2007 and 2012 and Africa Regional CIO based in Nigeria between 2014 and 2015.

Prior to joining Standard Chartered in 1994, Sheikh worked with National Audit Office of The Gambia.

Asiedua joined Standard Chartered in 2012 and has held various positions in the bank including Head, Brand and Marketing.

Prior to joining Standard Chartered, Asiedua worked with a number of global brands across geographies including Unilever, L’Oreal. Asiedua has an MBA (Marketing) from Fordham University

Alikem was appointed Head, Legal, Ghana on January 23, 2017 and is responsible for leading the legal team in the country.

She has twenty five years of experience as a legal practitioner. She has a Master of Laws (LLM) Degree in International Banking and Finance Law from the University of London. She has over twelve years of experience in private practice working with the law firm, Fugar and Company. She also has diverse and extensive experience in corporate and commercial law practice and worked with the African Development Bank (AfDB) at its headquarters in Abidjan and Tunisia respectively.

Alikem also spent six years in the mining industry where she was the Legal and Compliance Manager of Golden Star Resources Limited, a Canadian mining company, based in Denver, Colorado, USA with key mining operations in Ghana.

Prior to joining Standard Chartered Bank, she worked as the Director, Legal Services, The First Group (Ghana) Limited, an investment and management services company. Her hobbies are Reading, Gardening and Interior Decoration 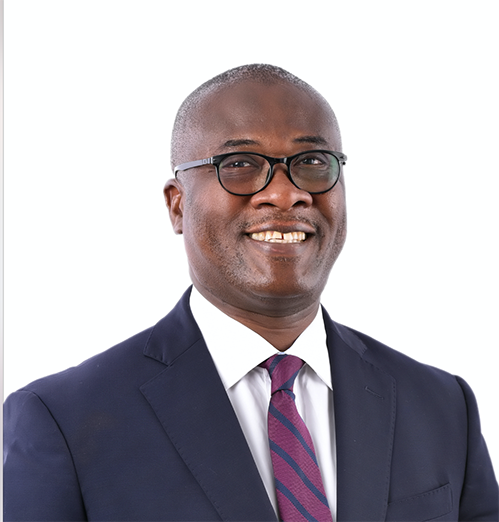 Adoteye has worked in various senior capacities in the Bank. He was Head of Global Markets in Uganda and Sierra Leone from 2007 to 2008. In his most recent role as Executive Director, Head ALM, Ghana and West 4, Adoteye provided leadership and played a critical role by ensuring high standards in the assets and liquidity management in the various countries.

Harry was appointed Head of Audit in November 2015. His responsibilities include managing and delivering the audit plan. This includes engaging with the Country CEO, External Auditors and regulator and providing assurance to the adequacy of controls to the Management Team and the Board.

Angela is a lawyer with a wealth of experience in branch banking having served in many roles, including Branch Manager, within the Retail Segment of the Bank. She joined the Legal and Compliance Department as a Compliance Officer in 2008, transitioning to the role of Legal Counsel for the Corporate and Institutional Clients Segment in 2010.

In her role as Company Secretary, Angela is the first female to have held this position in the Bank’s history in Ghana. In April 2015, Angela was appointed Regional Head for Subsidiary Governance, West Africa (excluding Nigeria), with responsibility for providing leadership and support to Cameroon, Cote D’Ivoire, Gambia and Sierra Leone to ensure that the Group’s subsidiary governance standards are fully implemented.

Angela is a member of the Ghana Bar Association, the Commonwealth Lawyers Association and an alumni of the 2010 Fortune/US State Department Global Women’s Mentoring Program.

As a Senior Credit Analyst and Regional Sanctioner, his role involved providing credit decisions and portfolio quality management support to the African region (excluding South Africa) businesses, as well as ensuring the highest standards of credit quality through the sanctioning, sampling and application of best practice to credit proposals.

He has over seventeen years experience in the banking sector primarily with the Barclays Bank group, with three years specific experience as a Chief Risk Officer with Barclays Bank, Seychelles.

He has good international exposure having worked in about four different countries within the Barclays Bank Group. He possesses a holistic understanding of the risk management discipline

Yvonne Gyebi was appointed Head of Retail Banking in December 2019 and is responsible for leading the strategic business growth agenda for the Retail Business.

Yvonne has extensive experience in senior roles within the banking industry. Over the nine years in Standard Chartered, She has served in various roles including Head of Medium Enterprises, General Manager Small & Medium Enterprises (SME), Head of Business Clients, Head of Client Relationships, Ghana & West Africa (excluding Nigeria), Country Head Commercial Banking and most recently, Value Centre General Manager for Retail Distribution, Priority and Digital Banking, where she deployed strategies to improve balance sheet growth and worked closely with the Regional and Country Digital Banking teams to implement the digital strategy including mobile client acquisition. Yvonne started her banking career in 2005 as a Management Trainee through the Young Professional Programme with Ecobank.

She is a graduate of Kwame Nkrumah University of Science and Technology and holds an MBA in Finance & Information Systems from A.B Freeman School of Business, Tulane University in the United States. Michael Oseku-Afful was appointed Head, Conduct, Financial Crime and Compliance on 1st January 2020. Prior to his appointment, he was the Head of Compliance for Corporate and Commercial Banking for Ghana.

Michael joined the Bank in November 2006 and has held many senior roles in Credit Risk, Credit Documentation, Legal and Compliance within the bank. Prior to joining Standard Chartered, he worked in Advertising and Public Relations.

This is to inform that by clicking on the hyperlink, you will be leaving standardchartered.com.ae and entering a website operated by other parties:

Thank you for visiting www.standardchartered.com.ae

This is to inform that by clicking on the hyperlink, you will be leaving standardchartered.com.ae and entering a website operated by other parties:

Thank you for visiting www.standardchartered.com.ae

Download our app for a faster and easier banking experience through your mobile.