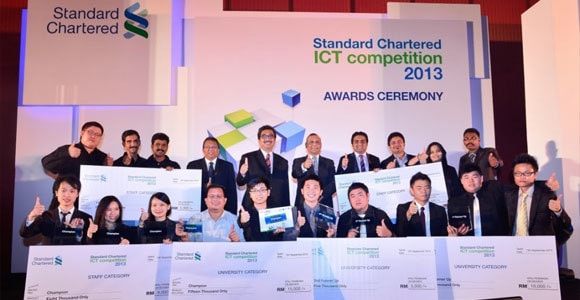 Dato' Arif Siddiqui, Chief Information Officer (CIO), Standard Chartered Bank Malaysia and Group CIO, Islamic Banking said: "We are amazed with the quality of ideas submitted. The winners demonstrated clarity of innovation, originality, feasibility and sustainability. For the bank, we realise that this competition signifies our quest to boost creativity and innovation and to further increase the knowledge of ICT amongst university students and also our employees."

Datuk Dr. Abu Bakar Mohammad Diah in his speech said: "The competition will present an unprecedented opportunity for our university students to appreciate the role of technology and innovation in our daily lives. It is my fervent hope that all the activities planned in this competition will significantly boost our university student's creativity in bringing innovative ideas to the competition which in turn will contribute towards the inventory of innovations and knowledge created in the country."

Standard Chartered launched the second edition of the competition in January this year as part of its continuing commitment to promote the development of the domestic ICT sector. At the close of the competition in March, the bank received nearly 300 submissions from innovators nationwide.

The competition gave participants the opportunity and platform to showcase their creativity and turn their ideas into innovation. It further reinforced their mindset on industry relevant solutions and improved their knowledge in ICT which is in-line with the Government's aspirations of a knowledge-based and innovation-led economy.

It was open to all public and private university students age 18 years and above and all Standard Chartered employees. To qualify for the competition, participants must join as a team of at least 2 members to a maximum of 5 members, and one member needs to be a Malaysian citizen.