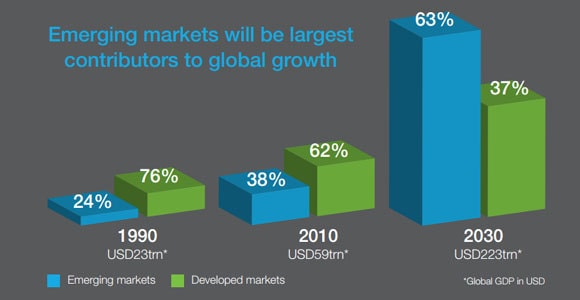 The super-cycle lives: EM growth is key Updated report predicts share of emerging market economies could rise to 63% of world
GDP by 2030 London, 6 November 2013 – Three years ago, our super-cycle report said that the world is in the midst of a third economic “super-cycle”, comparable with the periods 1870-1913 and 1946-73, which also saw unusually rapid world economic development.

Today, we argue that the global economic super-cycle remains largely intact and we forecast an average world growth of 3.5% for the 2000-2030 period; well above the 3.0% rate in the prior 20 years, helped by an expected pick-up in global expansion over the rest of this decade. We expect China to lead the way on reform; this could enable its economy to deliver an average 7% growth between 2013 and 2020 and with rebalancing the structure of its economy already underway for more sustained growth, 5.3% for 2021 to 2030.

As economies across Asia, Africa and Latin America transform themselves on the back of a growing population, an expanding middle class and rapid urbanisation, the share of emerging market economies could rise to 63% of world GDP by 2030, from 38% today; the increasing size of these faster-growing countries is a key driver of the super-cycle.

Meanwhile, world trade could quadruple in value to USD 75tn over this period, supported by new regional and bilateral trade agreements and the effects of globalisation and the internet which are encouraging the trade of services as well as goods.

Our 2010 report defined the super-cycle as “a period of historically high global growth, lasting a generation or more, driven by the opening up of new markets, increasing trade, and high rates of investment, urbanisation and technological innovation.”

Although scepticism has risen in recent years as a result of a slowdown in some major emerging economies and also due to the severity of the euro-area crisis, our new report suggests that a modest set of reforms could trigger a growth revival in several large emerging economies, including China, India, Indonesia, Nigeria and Brazil.

The growing scale of the emerging economies is key to providing momentum to world growth. For example, economies with growth rates exceeding 4% - primarily consisting of emerging economies - now account for 37% of the world GDP, up from 20% in 1980. Their share is set to reach 56% by 2030, according to the revised forecasts. Asia (excluding Japan) is likely to account for two-fifths of global GDP by 2030.

Our report also argues that:

Meanwhile, many developed economies are healing from the 2008-09 financial crisis. According to the revised estimates, the US economy has the strongest momentum in the developed world, with private sector balance sheets largely fixed. The world's largest economy is estimated to grow at an average 2.8% from 2013 to 2020 and 2.5% in the following decade.

John Calverley, Global Head of Macroeconomic Research, said: “Recent pessimism about emerging markets is overdone. Concerns over the middle-income trap, excessive Asian leverage, 'broken' growth models and rising US interest rates appear exaggerated. While we have lowered our long-term forecasts for China, India and Europe, the case for an emerging markets-led super-cycle still holds. Successful reforms will be critical for these economies to realise their catch-up potential.”