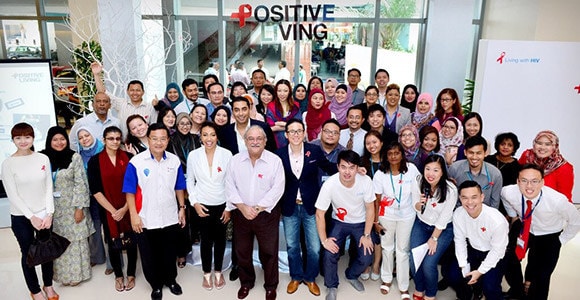 The LwHIV programme was prompted by the pandemic in 1999, which directly and indirectly affected employees and customers in the communities in Africa, where the Standard Chartered Group operates. Through this programme, the Bank began providing information for staff to make safe lifestyle choices and knowledge to prevent the spread of the virus. Standard Chartered is one of the first international banks to take proactive approach in fighting HIV and AIDS by making the programme mandatory for all employees globally. The LwHIV programme forms one of the sustainability pillars of the Bank under its brand promise, "Here for Good".

Celebrating LwHIV’s 15th anniversary Saif Malik, Managing Director of Corporate & Institutional Clients segment, who is also the LwHIV Country Exco Sponsor, said during the "Positive Living" campaign launch, "As part of our LwHIV 15th anniversary, we are recommitting ourselves to fight stigma, complacency and fear of HIV and AIDS through our global "Positive Living" campaign. "Positive Living" is about changing the perceptions and our behavior towards the pandemic. A few simple ideas and positive actions such as how you wear the red ribbon can help change how we, as well as people around us, view and act towards people living with HIV and AIDS. These, in all, resonate in our Positive Living statement that reads: HIV doesn’t discriminate. People do. Let’s change the way we see it."

The red ribbon, tilted 45 degrees clockwise rotation, symbolizes the change in perception and greater empathy to people living with the virus, by encouraging people to see the person and not the virus..

Statistics from the Ministry of Health showed that there were 1,676 HIV cases, 598 AIDS cases and 402 deaths due to the disease in the first half of this year. Of the total number of 1,676 HIV cases, 1,337 cases involved males and the rest females. To date, there are 86,606 people living with HIV/AIDS in Malaysia alone.