To pivot or not? That’s the question Fed policymakers will have on the top of their minds as a tumultuous year winds down. Investors expecting a policy pivot have so far been disappointed by hawkish rhetoric coming from Fed officials. Core inflation (excluding food and energy) rose to 6.6% in September, the fastest such pace in four decades, driving market expectations for the Fed terminal rate higher from 4.5% to 5% in a matter of weeks in October. Real interest rates are now positive across all but the shortest maturities, which is one of Fed Chair Powell’s explicit objectives – to encourage increased savings, reduce demand, cool the labour markets and slow the economy.

How long will this process take to play out? Will this be sufficient to cool the red-hot labour markets and how high will bond yields eventually end up in the current hiking cycle are important questions for investors. Without trying to predict a specific peak in bond yields, the risk-reward balance favours, in my view, taking advantage of higher yields, particularly on any spikes, in quality bond assets and diversified multi-asset income strategies.

In the subsequent sections, I explore episodes of past Fed policy pivots to determine how long it typically takes for bond yields to peak. I also investigate what a policy pivot potentially means for equity and bond markets.

US 10-year government yield peaks before the last rate hike

For bond investors, accurately identifying where the peak in bond yields (terminal rate) might be is one important gauge for an investable bottom in bond assets. While shorter-term rates tend to track the Fed’s policy moves closely, intermediate- and longer-maturity yields often reflect the outlook for growth and inflation expectations. Historically, peaks in 10-year government bond yields have almost always occurred just before the last rate hike. Rising policy rates undermine growth and weaken labour markets, depressing yields on longer-tenure government bonds. Real yields, therefore, unsurprisingly also tend to peak around the same time as the highs in policy rates.

This is the all-important question for investors. Fed Chair Powell has given three criteria he will use to decide when it will be appropriate to stop hiking: i) below-trend growth for a sustained period, ii) a softening in labour markets, and iii) evidence that inflation is moving back towards its 2% target.

The first criterion has yet to be met, with US Q3 GDP recovering above trend, easing fears of a US recession after GDP in the previous two quarters contracted. That said, the Q3 growth in part came from a transitory jump in net exports, which is not unlikely to be repeated.

On labour markets, there are limited signs justifying a Fed pivot any time soon. The labour market remains very tight – jobless claims are around their 1-year lows, with the unemployment rate at a 50-year low of 3.5% in September. The Fed is projecting unemployment to rise to 4.4% by end 2024. History suggests once the unemployment rate rises by over 0.6% ppt, it tends to keep rising by at least 2.1ppt from the trough - perhaps not quite the soft landing the Fed envisages or at least hopes for. Therefore, the Fed needs to pull off an extremely delicate balancing act to engineer a growth/labour market slowdown while fighting inflation.

Finally, inflation has arguably peaked much earlier, which is different from past episodes of Fed policy pivots. Since the 1970s, inflation peaked on average six months after the final rate hike during hiking cycles. This time, while the Fed is expected to hike rates further, headline inflation has likely peaked, while longer-term inflation measures are back down to the 2-3% long-term range.

Policymakers, however, do not appear to be relenting, conscious of the 1970s’ perils of premature easing, given still-high inflation. Since the Global Financial Crisis, inflation has been consistently higher than the Fed funds policy rate, as policymakers suppressed real rates to spur growth and inflation. The reverse is now occurring as high near-term inflation (at c.8%) forces  policymakers to hike rates aggressively, lifting long-term real rates with an aim to reduce aggregate demand and, thus, inflation.

Markets are expecting a pause in the Fed’s tightening cycle sometime in the first half of 2023. Whether the pause will be followed by a rate cut or a resumption of rate hikes will depend on how much disinflation occurs and the eventual impact it has on the labour markets.

A Fed pivot has had mixed impact on equity markets historically. Policy pivots during recessionary periods generally see equity markets declining further, regardless of rate cuts. Rate cutting cycles over the past three recessions also coincided with significant falls in equity markets. Episodes that saw equities climbing further after a policy pivot witnessed modest gains, c.8% following the final hike. The best equity performance, however, tends to occur during the tail end of the policy easing cycle and just before the first Fed hike. This is usually a time when inflation is mild, unemployment is falling, and growth/earnings outlook are starting to improve.  So, a Fed pivot is not always a necessary condition for equities to advance. What is perhaps more important is an improvement in the economic and earnings outlook.

Thinking linearly can be costly

Thinking linearly can be costly 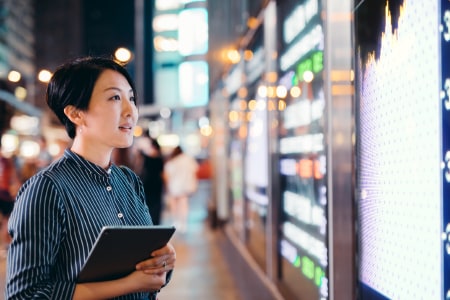