A paradox is disturbing many economists and businesses across the world – productivity growth in both developed and developing countries is relatively weak despite rapid advancements in digital technology.

Total factor productivity (TFP), the measure of productivity which most aptly captures technological change, grew by 0.9 per cent per annum during 1996-2006 but collapsed abruptly after the global financial crisis to -0.1 per cent per annum from 2007-14. Since then, TFP growth has turned even more negative, and was at its lowest level since the 1940s in 2015, at -0.7 per cent. It stood at -0.5 per cent in 2016.

To many observers the ongoing productivity slump is puzzling and worrisome, with some believing that the global economy has entered an era of secular stagnation or sub-par growth unlike what we have seen historically. They argue that slow growth is the result of new innovations not being as transformative as old ones and that the digital technology boom pales in comparison with the great innovations of the first and second industrial revolutions.

Why this is not a unique period

The ‘techno-pessimists’, as they’ve been dubbed, say innovations during the 1870-1970 period were powerful job creators, thereby distributing income to a bulk of the population. The rise of the automotive industry created many solid, middle-class jobs in manufacturing, driving, repairing and insuring cars and trucks, for example.

What the pessimists should remember, though, is that the current weak period is not unique. Similar slumps were seen when structural technological changes in the second industrial revolution occurred. Digital technology will be as transformative as older innovations such as electricity and the steam engine – the big impact just hasn’t hit the world yet.

In fact, digital technology is likely to help the services industry grow in many sectors. The internet, for instance, has allowed previously non-tradable services – items which are not traded internationally – to become tradable through integration into global supply chains. Decreases in air travel costs, rapidly declining telecommunication costs, increasing internet adoption around the world, and rapid proliferation of broadband services have made internationalisation of a host of information-intensive (previously non-tradable) services possible.

The boosts will come in waves

In the past, the gains from technology sometimes came in waves. Labour productivity growth during the revolution of electricity, for instance, shares a common pattern with the IT era. In both cases, the sluggish growth at the beginning was followed by a surge in productivity for decades later. We think the digital era will follow a similar pattern. 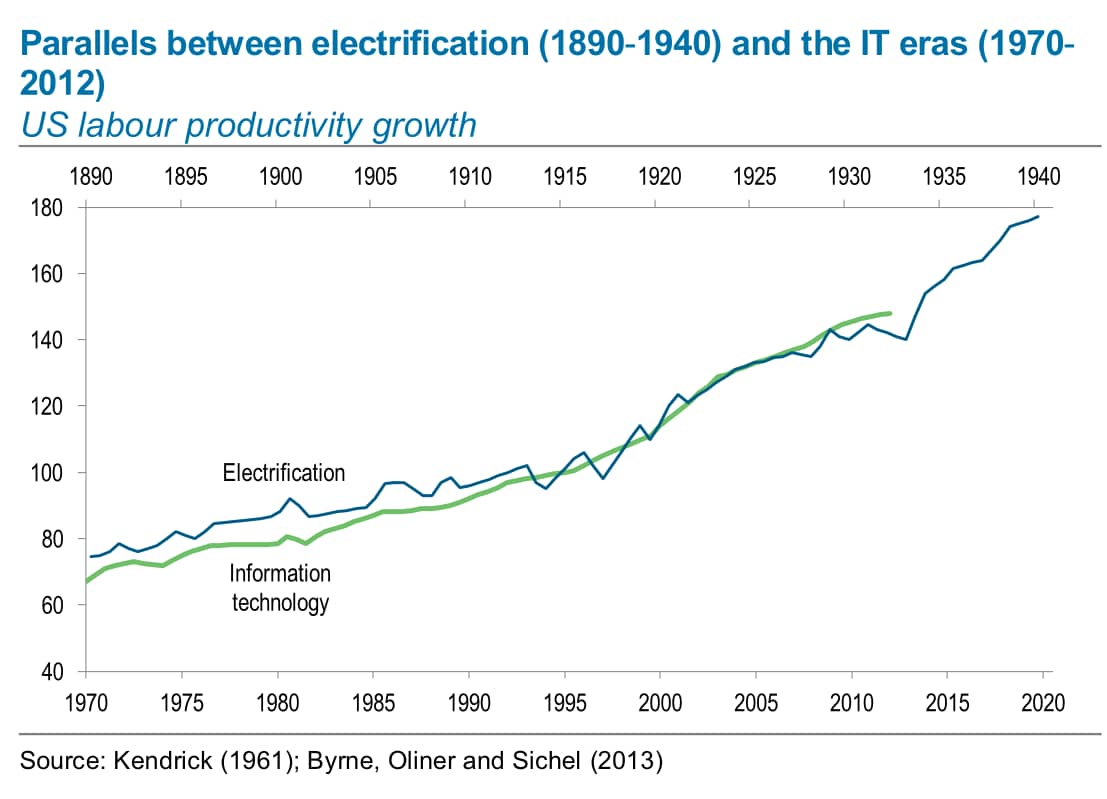 So when can we expect this surge to manifest itself? We think it’s on its way, but don’t expect a significant impact on productivity in the next year or two. Driven by big data, robotics, the internet of things and 3D printing, it could emerge within three to five years, but is probably more likely to unfold over the next several decades.

How digital technology will boost productivity