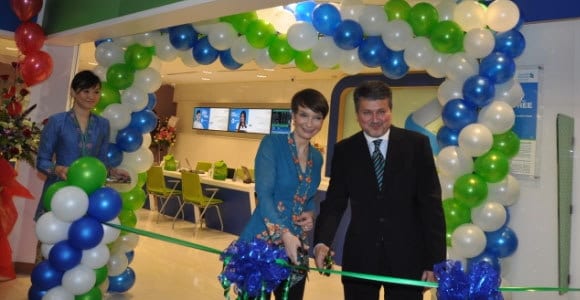 In conjunction with the opening, the Bank which was recently awarded Best International Islamic bank by Euromoney Islamic Finance Awards 2013 also held its Shariah-compliant financial literacy programme for the communities here.

Speaking at the event, Wasim Saifi said,
"Islamic banking has been growing twice as fast as conventional banking owing to the rising customer demand, increasing sophistication of Islamic banking offerings, and strong government support. This new branch alongside our community engagement Minda Wang furthers our ongoing strategy to support this growth, whilst expanding our Islamic banking footprint in East Malaysia and throughout the nation."

The new branch opens seven days a week, extending its operations to the weekends in order to improve customer access to the Bank's facilities and services.

Located at leading shopping spot The Spring, it is Saadiq's tenth branch in the country that reaches out to customers around Tabuan Jaya, Kenyalang Park and the surrounding areas. It complements the seven existing conventional branches in East Malaysia.

Minda Wang financial literacy programme represents Saadiq's long-term efforts in engaging the communities where its branches are located, reaching out to the locals as well as enriching the lives of the less fortunate. It is designed to educate Malaysians at all levels on Islamic banking and better financial management. The programme has so far reached out to over one thousand children across Malaysia since its launch last year.

Commenting on Minda Wang, Wasim said,
"Minda Wang is our effort to lay the foundation for building a financially literate society that will help bridge the socioeconomic gap and improve the quality of life. In addition, the unique Shariah-based programme fits well with the government's ambition to strengthen Malaysia's position as the global hub for Islamic finance."

In the past year, Saadiq has charted significant growth of 41 percent in the consumer banking revenue. Leveraging on the government's agenda, as well as the growing popularity of Islamic banking as an alternative, the Bank hopes to strengthen its business in Malaysia by increasing reach, especially to the small and medium-sized businesses and introducing a complete range of Islamic products.

Journalists and media organisations can contact us directly with their enquiries. View our contacts
Back to Top