KUALA LUMPUR, 20 December 2016 – The LFC World roadshow transformed IOI City Mall into a fun-filled extravaganza for supporters of one of the most celebrated football teams in the world, currently in the top four of the English Premier League. It was truly a ‘money can’t buy’ experience that Standard Chartered Bank and Liverpool FC (LFC) were able to bring to Malaysia.

LFC World is about bringing the Club and Anfield closer to its fans in Asia through an immersive fan-experience. Fans had the opportunity to zoom into the action of their iconic club by engaging in fun and interactive activities that bring to life the buzz of world class football.

One of the highlights of the roadshow was the appearance by LFC legends: Robbie Fowler, Patrik Berger, Vladimír Šmicer, and Bruce Grobbelaar, who met with die-hard supporters and soccer fans at the mall.

For the very first time in Malaysia, soccer fans were able to experience “Inside Anfield” — a sneak peek into Liverpool’s stadium via the latest in Virtual Reality (VR) headset technology. Fans were even able to step into the players’ shoes, giving them a unique insight into the team’s inner sanctum, experience Jürgen Klopp’s pep talk in the dressing room and walking out from the players’ tunnel to see the home crowd at Anfield. There are no other clubs who can give such an immersive experience that money can’t buy to Malaysian fans.

Aside from the fan experience at the mall, LFC World was also able to bring some cheer to underprivileged children who are passionate about football. Close to 70 children, comprising underprivileged and children of Standard Chartered staff, were coached by LFC Soccer School coaches at Alice Smith School in Putrajaya.The event was the perfect opportunity for Standard Chartered and LFC to give back to the community through sports. 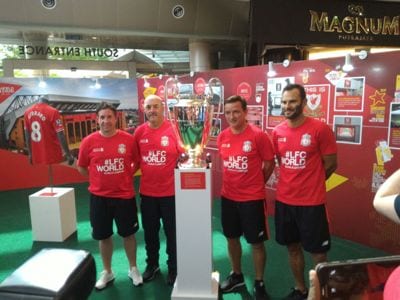