From its inception, the Belt and Road (B&R) initiative has provoked almost as much skepticism as interest, particularly among European and North American business commentators.

Although China has issued detailed statements on B&R goals and provided regular progress updates, for some observers the initiative’s achievements and motivations remain unclear. Critics also like to point out that most B&R-related projects are in emerging markets, which typically carry greater regulatory, operational and revenue risks than their developed-market counterparts. Yet such concerns have done little to dampen B&R project activity in emerging markets. Around USD350 billion worth of projects have been financed thus far, and much of this has been for infrastructure in emerging markets. Some of these infrastructure projects are even reviving ideas that had been written off as financially unfeasible before B&R began. 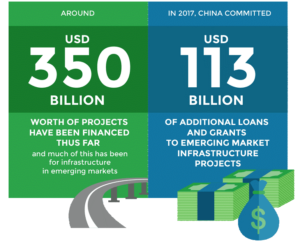 Moreover, more investment has now been committed; in 2017, China pledged RMB780 billion (USD113 billion) to finance B&R projects. With much of this expected to go towards emerging-market infrastructure projects, momentum should only continue.

Risks and Fallout in Emerging Markets

Emerging markets typically face greater investment risk for a variety of reasons. According to Charles Jillings, chief executive at ICM Investment Management, these include disruptive politics, weak rule of law, corruption, and inefficiency – characterised by poor planning and budgeting, inflation and delays. In addition, investors, construction companies and ancillary services firms face currency and refinancing risks shaped by macroeconomics and creditors’ perceptions of such markets.

Chinese overseas projects experienced the fallout of such risks long before the B&R initiative began. For example, the Philippines government scrapped a China-funded USD1 billion railway project linking Manila and Clark just as construction was about to start in 2008, citing questions over contracts and allegations of corruption. However, post B&R-initiative kick-off (and with a leadership in the Philippines more conducive to Chinese investment), the case was settled out of court in 2017 and work on the 80km rail link began. 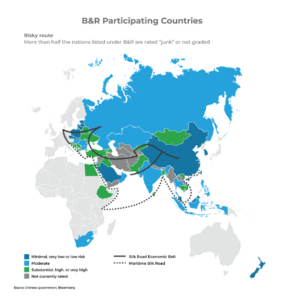 The short answer is no. Perceived risk remains a major impediment to investment in emerging markets, with the sovereign debt of more than half the nations listed under the B&R initiative rated as ‘junk’ or not even graded by the three main ratings agencies (see Figure 1). Much of the operational risk along the B&R has so far fallen on Chinese state-owned enterprises (SOEs), with China’s policy banks taking on much of the financial risk. As more private Chinese companies and funders become involved, they are being encouraged to buy state-backed insurance that underwrites potential economic losses that are caused by political risk in the host country. It’s clear that emerging markets along the B&R remain fields of opportunity that must be carefully assessed and negotiated. However, B&R’s ability to initiate projects that investors have previously ignored or abandoned does create opportunities in emerging markets. Infrastructure drives such as the Lapsset Corridor in East Africa are comprised of multiple large projects that require support in fields including survey, engineering and construction, plus logistical and administrative services.

The Johannesburg-based investment advisory firm Africa House has signalled that the corridor will bring significant opportunities in the breakbulk sector, but wisely cautions potential investors to examine the progress of competing infrastructure projects in Africa.

Some argue the risks associated with B&R are exaggerated, citing China’s continued commitment to building strong bilateral relationships and the increasing involvement of multilateral companies in the B&R as evidence of a healthy investment environment. 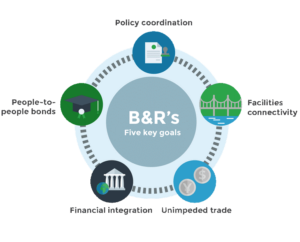 The initial phase of B&R has been focused on energy and infrastructure but as time passes, the initiative will encompass more of the five key goals that China identified. As B&R projects begin to encompass more trade, manufacturing and services, the opportunities for multinational companies should increase. Ironically, it could be the geopolitical and financial risks associated with B&R that are driving China to look for more international participation.

The infrastructure improvements brought about by early B&R investments should also make industrial and commercial investment in emerging markets more attractive. At the same time, if B&R achieves its goals of improving policy coordination, trade agreements and financial standards between B&R countries and partners, risks should naturally diminish.

China is also doing its part to mitigate risks. In light of domestic concerns about bank exposure, it has introduced tougher scrutiny of B&R deals made by its state-owned enterprises (SOEs), holding SOE managers to account for investments that do not work. In order to reduce risks, China is also opening B&R up to multiple sources of funding including developed nations such as the United Kingdom and Germany as well as multilateral banks such as the Asian Infrastructure Investment Bank (AIIB).

There can be no doubt that much of the opportunity afforded by the B&R lies in countries that remain vulnerable to risk. Yet as already shown, investment sentiment continues to improve despite the risks; investment from multinational companies in emerging economies is expected to accelerate, according to Harvard Business Review. Companies looking to get involved should have a risk management plan, ideally accompanied by on-the-ground experience in dealing with problems that arise. In all of this, partnerships with banks that have local knowledge and the ability to provide debt financing can be crucial in minimising risk.

Expertise in drafting and administering contracts will also be crucial in the long run, providing further justification for local risk-management partners to be utilised. According to Paul Teo, head of arbitration for Greater China at international law firm Baker McKenzie, if these tasks are managed properly they “will help ensure that the project is completed on time, within budget and to satisfactory quality, while at the same time allowing legal claims and disputes to be resolved expeditiously.” Essentially, investment in professional risk assessment should lead to a greater return on investment projects along the Belt and Road.