Special purpose acquisition companies (SPACs) were little-known beyond Wall Street equity specialists 18 months ago. So far in 2021, 70% of US IPOs have been SPAC IPOs and total issuance has already outpaced the whole of 2020.1

The geographical focus has also started to shift: in April, Southeast Asia’s leading superapp Grab announced a merger into a SPAC that values the company at USD39.6billion, the largest SPAC merger to date.2 Exchanges in Singapore, Indonesia and Hong Kong are exploring the possibility of developing their own SPAC markets.3

SPACs provide a game-changing way of taking companies public, particularly those in high-growth sectors. So how can banks help businesses and investors to seize the opportunity while avoiding the pitfalls? And will growing regulatory scrutiny stop the phenomenon, or create a sustainable, long-term market? 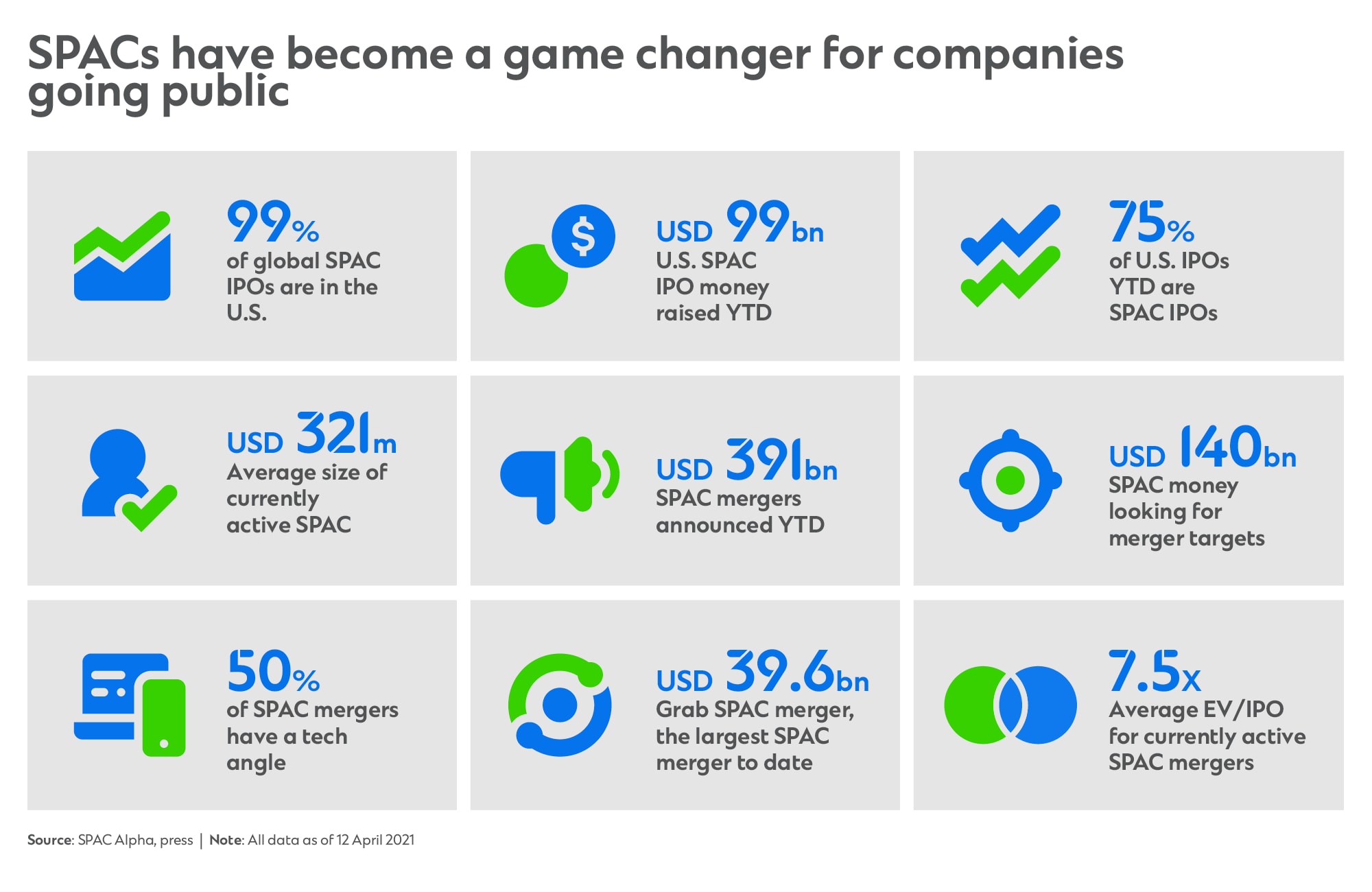 After listing on a stock exchange, SPACs – also known as ‘blank cheque companies’ – have 24 months to merge with a target company. More than half of the currently active SPACs are looking for companies in the broader technology sector.

One key reason for this alignment is that SPACs permit companies to use financial forecasts, whereas traditional IPOs do not. That means SPACs allow high-growth companies to go public earlier and often at higher valuations.

The ability to use forecasts is not the only advantage, explains Ralf Pilarczyk, Head of M&A ASEAN at Standard Chartered: “SPACs allow company owners to negotiate transaction pricing themselves,” he says.

“In a traditional IPO, pricing is determined by way of book-building; in a SPAC, owners have a seat at the table.”

Although the current SPAC boom is young, it is evolving fast. The SPAC market has historically attracted companies from the US and Europe. However, more recently, Asian companies have also started exploring going public via SPACs in the US.

In 2021, two landmark deals, in particular, have made international headlines. The first was the announcement of the SPAC merger of cleantech unicorn ReNew Power, India’s biggest renewable power producer. The second was Singapore’s Grab, which made history as the world’s largest announced SPAC merger to date.

Such landmark transactions are raising investors’ attention and putting Asia’s unicorns firmly on the map. Around USD140bn of SPAC money4 in more than 400 SPACs5, are actively seeking merger targets, and the focus is shifting east. At the start of 2021 there were 176 unicorns in Asia.6 The task ahead is matchmaking.

“There is a broad range of SPACs in New York which are focused on Southeast Asia, trying to find merger companies in high-growth sectors right at our doorstep,” he says.

Following Wall Street’s SPAC surge, Singapore Exchange Ltd (SGX) is exploring its own listing framework for SPACs,7 while Indonesia and Hong Kong are evaluating their options.8

The exact regulations, potentially including greater safeguards, are still being worked out. What is clear, is that their formulation will be a key driver of whether SPAC IPOs will take off in Asia or not.

In the meantime, the US Securities and Exchange Commission (SEC) is reviewing accounting treatment and disclosures of SPACs. Depending on the resulting regulatory actions, there is a possibility that this will cool the SPAC IPO market or the SPAC merger market.9

“For the time being, companies are finding it very attractive to be able to negotiate transaction pricing themselves and to be able to use forecasts when doing so.”

He adds that SPAC sponsors are also becoming increasingly flexible.

“Regulatory changes may mean that we are seeing the peak of the SPAC boom. Nonetheless, the SPAC structure looks here to stay. For now, Asia’s entrepreneurs are seizing the opportunity.”