Sustainability stole the limelight in 2020. Green recovery packages fuelled cleantech investments as Covid-19 wreaked havoc on the global economy. Investors pumped record inflows into ESG-tilted funds amid a shift in preferences. And more companies set net-zero targets. With new challenges and opportunities on the horizon, here are five trends that could shape the sustainability landscape in 2021.

President Joe Biden aims to make the U.S. a global leader in the development and adoption of clean energy technologies. During his presidential campaign, he promised to invest USD400 billion in clean energy technologies and innovation over ten years and reverse the pro-fossil-fuel policies put in place by his predecessor, Donald Trump.1 Given the democratic party’s effective control over both houses of Congress, there’s a decent chance that Biden will realize some of his agenda, though not without compromise. Hours after taking office, Biden re-joined the Paris Agreement and put a moratorium on oil leasing in the Arctic National Wildlife Refuge.2 It was a significant step for the world’s second-largest carbon emitter and likely the first of many to come. In April, the government will announce an “aggressive” carbon-cutting pledge, according to White House Climate Advisor Gina McCarthy.3 And in the longer term, Biden aspires to put the U.S. on track for a carbon-free electricity grid by 2035.4

With the pandemic taxing public health and the U.S. economy, the government may face hurdles in putting its strategy to work for some time. That said, the re-making of the U.S. power sector will create investment opportunities. Decarbonizing the electricity grid over the next 15 years would require up to 800GW of new generation capacity5 and billions of dollars of investment. That could prompt a capital flow from investors who invested in projects in emerging markets due to market saturation in the U.S. In turn, that would leave more space for local players in emerging markets. Both events would open new investment options.

Expectations for a slew of renewable energy projects under the Biden administration sparked a cleantech stock rally. Valuations for once-obscure clean-energy companies have surged into the billions since November. Some have little or no income, leading to speculation that a bubble is at hand. The chart below compares the cleantech rally to the dot-com bubble in the late-1990s. 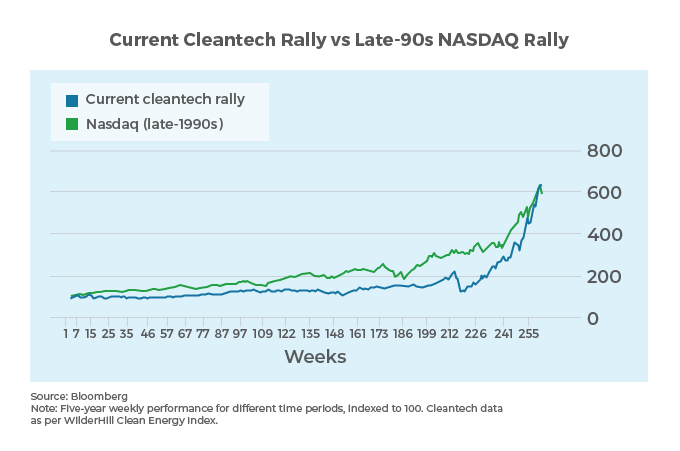 A couple of examples serve the point. ITM Power, a green hydrogen darling with negative EBITDA, is worth USD4 billion. That’s more than 400x its 2021 forecast revenue. Electric vehicle charging station company Blink Charging is now valued at USD1.9 billion despite having never posted an annual profit.6 This phenomenon exists across the entire cleantech sector, from renewables and green hydrogen players to equipment manufacturers. 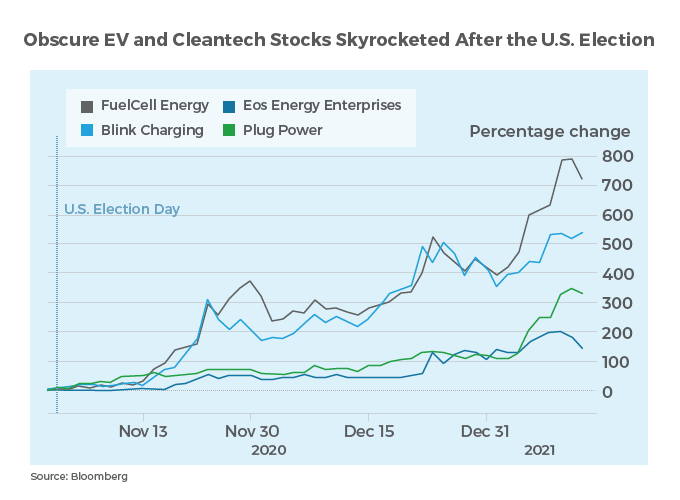 Another thing to keep in mind is that renewable energy and cleantech projects are capital intensive. Given that most of the investment is upfront, capital costs can make or break a project. AS the cost of capital decreases, we’ll likely see new lows on the pricing for renewable auctions and other cleantech infrastructure assets.

Portugal surprised the world with the lowest-ever bid for a large-scale PV project. The government allocated 670 MW of solar capacity, with the auction drawing €0.01114 (USD0.01316)/kWh, according to preliminary results.7 That compares with around USD0.43 a decade ago.

Analysts suggest that 2021 will be the biggest year yet for PV installations. Conservative estimates tip 151 GW of installations, while optimistic estimates come in at just under 200 GW. As the scale of projects increases, interest rates plumb new lows and the costs of equity continues to fall, tariffs could fall below USD0.01. While that’s certainly not our base case scenario, it’s difficult to rule out. Declining prices will impact project selection as investors must back what is economically sustainable in the long term. We expect sustained momentum in greenfield capacity additions across different markets. Industry players will be on the lookout for traditional PF loans as well as other pools in the capital structure to meet their growth requirements. Interest in cleantech project bonds is also likely to pick up 2021 amid a push to recycle debt capital.

Commercial viability for green hydrogen is at least a decade away. That assumes rapid cost reductions, increasing policy support and huge infrastructure investments. Historically, cost-efficient commercial solutions and the market opportunity created through policy support have proven to be two completely different things for clean energy. That said, we believe that, along with batteries, this is the cleantech market to watch in the decade ahead.

Clean hydrogen entered the new year with stellar momentum. In 2020, a record number of countries released hydrogen roadmaps, the project pipeline expanded, and electrolyzer shipments reached a record high.8 As estimated 240MW worth of hydrogen electrolyzers is scheduled for completion in 2021, nearly triple that of last year.9 While this is a small amount, growth underscores enthusiasm around hydrogen’s ability to decarbonize hard-to-abate industries.

Given the versatility of hydrogen, more power-to-x projects could arise at the crossroads of power and adjacent sectors. In turn, we anticipate greater interest in cross-sectoral alliances, joint ventures and acquisitions as the industry converges. However, on the whole, the monetization potential for green hydrogen will remain limited in the near term as it’s still early days.

Venture Capital and Private Equity (PE/VC) investment in renewable energy and storage rose 51% in 2020 to a record-high of USD5.9 billion. The largest investments included USD850 million for a solar project developer in the U.S. and USD600 million for a battery maker in Sweden. Meanwhile, corporate M&A and PE buyouts totalled USD34.7 billion.10 We expect PE/VC investment in renewables and storage technology to gather pace in 2021. 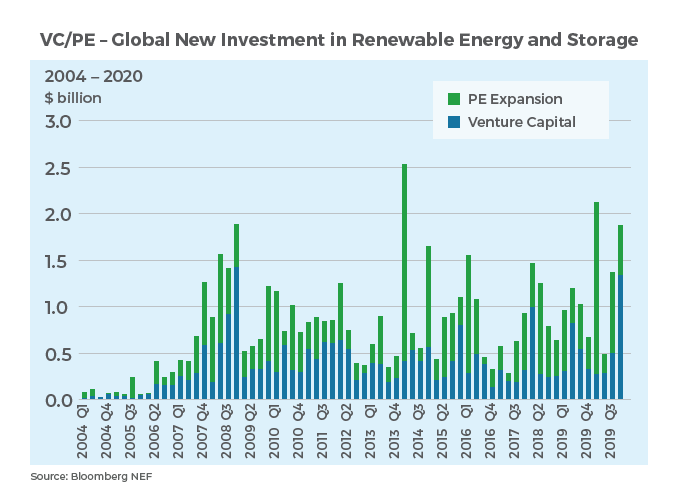 Asia will likely lead the way. It remains the world’s largest market for renewables and has already seen signs of activity in 2021. KKR, for instance, raised $3.9 billion for its first Asia-Pacific infrastructure fund in January.11 It plans to invest in everything from renewable energy to waste management. That aligns with analysis from KPMG suggesting that renewable energy and infrastructure projects could propel increase inbound PE investment into APAC this year.12 The mix of projects and solutions that PE/VC firms invest in may evolve. For instance, 2020 was a banner year for Carbon Capture and Storage. Total investments from all sources surpassed that of 2018 and 2019 combined. Start-ups providing technology for Direct Air Capture—a complementary technology—closed large funding rounds in the past three years. These and other transitionary clean energy technologies could garner more PE/VC investment in 2021 and the years ahead.

Bright Spots in the Crystal Ball

It there’s a universal takeaway from the unprecedented disruption in 2020, it’s that nobody can predict the future. While we won’t make the bold assertion that the five trends covered in this article will calcify as suggested, barring any black swan events, unseen shocks and other disruptions, they will likely play a big role in shaping the cleantech landscape for the rest of this year.