Just when sub-Saharan Africa was learning to live with one bout of volatility in the form of COVID-19, another has followed hard upon its heels. Rocketing prices of commodities in the wake of Russia’s invasion of Ukraine should in theory assist some African countries, but in practice not all are well-placed to benefit from this silver lining. Meanwhile, the unwinding of COVID support in Africa is a key risk given high debt ratios and normalising monetary policy.

Africa looks beyond the pandemic

Sub-Saharan Africa has been slower than other regions to roll-out vaccines against COVID-19. The rate varies wildly between the most-vaccinated countries, such as Mauritius (c.80% have received at least one vaccine) and Botswana (62%), and countries like Tanzania and Cameroon where fewer than 10% of the population have received at least one dose. The region was impacted end-2021 by a wave of infections following the emergency of the Omicron variant.

Figure 1: Omicron is falling but vaccine rollout is slow 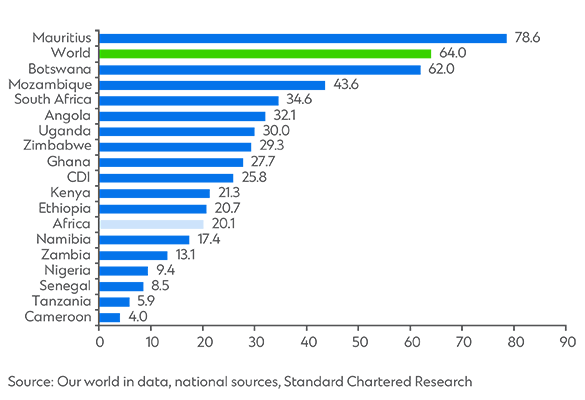 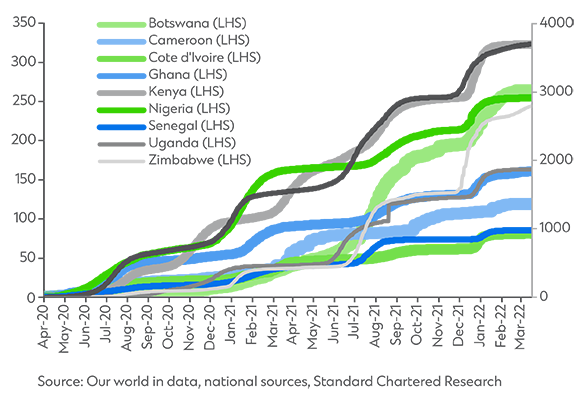 Vaccinations picked up pace significantly in early 2022, notably in larger countries such as the DRC, Ethiopia, Nigeria and Kenya.1 Travel curbs in southern Africa prompted by the emergence of Omicron were lifted quickly following signs that the variant is less severe than previous ones, and as things stand we foresee no further harsh restrictions on economic activity in 2022.  Improved rates of vaccination should reduce the mortality rate and disruption associated with future COVID variants.

As was the case elsewhere, the region was impacted badly by COVID restrictions put in place in 2020 and as a result the region’s GDP contracted. While the region saw a technical recovery in 2021, growth remains below pre-COVID levels. In 2022, growth concerns may be back in focus given high inflation and the region will no longer benefit from the low base.  Rapid growth is likely to be needed to reassure investors that higher debt-to-GDP ratios, exacerbated by the pandemic, can be brought back down.

Vaccinations notwithstanding, it seems likely that the pandemic will outlast the debt-relief measures put in place to mitigate its effects. Nearly two years ago, in May 2020, the G20 group of major economies established the Debt Service Suspension Initiative (DSSI), which froze up to USD13 billion owed to creditors by 48 low-income countries, many of them in Africa, thereby freeing-up fiscal space to fight the pandemic.2  Three countries in need of more extensive debt-restructuring – Ethiopia, Chad and Zambia – have requested restructuring of their debt under the G20 Common Framework for Debt Treatment, an extension to the DSSI that aims to deal with longer-term debt sustainability.

A key question remains whether additional countries may choose to restructure their debt under the Common Framework. This remains an option for countries in the region concerned about their longer-term debt sustainability but the slow progress on restructuring negotiations so far may be a bottleneck. For Ethiopia and Zambia, who are already engaged in the process, the focus will be on how quickly market access could be restored. Despite market volatility, Angola and Nigeria - beneficiaries from higher oil prices - have issues Eurobonds in 2022.  Access to external markets will be important given the need to roll over Eurobond debt maturing in the next three years.

One eye on the outside world

The external environment will be key for the region’s ability to access external capital markets. Central banks around the world have shifted to a more hawkish stance to reflect rapidly rising inflation linked not only to COVID-related supply chain disruption but also, now, the effect of sanctions against Russia. Hikes from the Fed and other major central banks have placed pressure on African nations to follow suit in order to prevent capital flight, particularly those with extensive foreign investor participation. South Africa, Ghana and Zambia all raised rates towards the end of 2021. 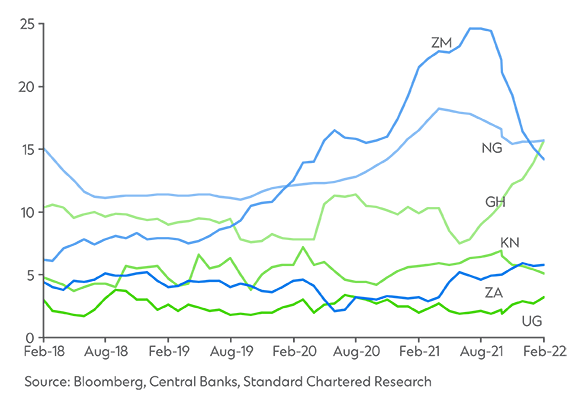 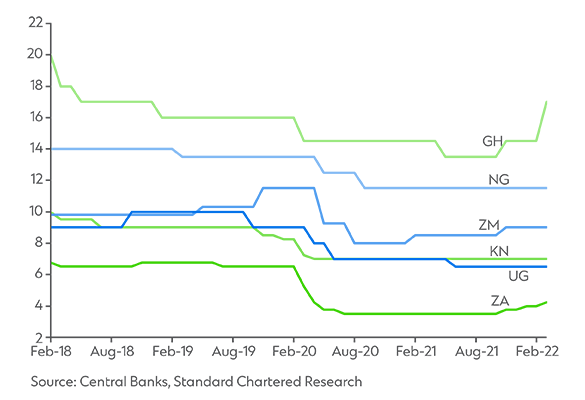 Domestically, the impact of inflation varies across sub-Saharan Africa, as Figure 2 illustrates. In theory, the soaring commodity prices underlying these rising prices should be helpful to Africa’s commodity-exporting countries, but in practice, the picture is mixed. Nigeria and Angola haven’t seen any meaningful increase in their foreign exchange reserves from spiking oil prices, in part due to constraints in oil production (both are producing below their OPEC quotas) and the impact of high external debt service and fuel subsidies.

Other African economies may be better-placed to capitalise on the current volatility. Russia is one of the world’s major producers of palladium, for instance, a key input into catalytic converters for diesel vehicles.3 Sanctions on Russia have pushed palladium prices to record highs, benefiting economies such as South Africa, which was the world’s foremost producer of the metal in 2021.

The disparate impact of all this volatility on individual African markets means that the national picture will be just as important as the regional one. Countries that have a strong story to tell around fiscal prudence will find the readiest access to debt markets, while rapid GDP growth will likely be found in the ones where the negatives of rising prices are offset by rising export values.