Imagine that you govern one of the world’s many growing cities. As the population increases, demand for electricity rises in tandem. How would you add new capacity to meet that demand in the most efficient, sustainable and cost-effective manner? Renewables accounted for nearly three quarters of new energy capacity brought online in 2019, outpacing fossil fuels for the fifth consecutive year.2 Even as currency volatility and supply chain disruptions stemming from COVID-19 delay new capacity, the International Energy Agency expects demand for renewable energy to grow 1 per cent in 2020 – anaemic in a normal year but stellar given that other sources are forecast to decline.3 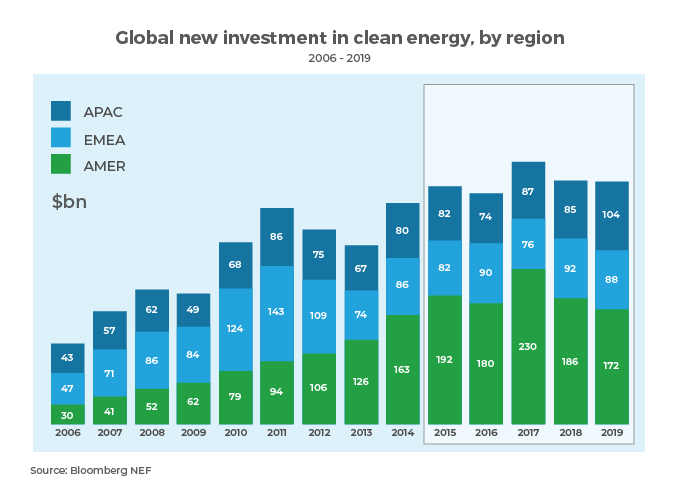 Lower costs and technological maturity should make wind and solar the clear choices to meet the 62 per cent rise in electricity demand forecast over the next thirty years.4 Yet, investment growth stalled a few years back.5

“What's happening now is that the cost reductions and volume growth are effectively offsetting one another, which is why investment levelled out over the last few years,” says Sujay Shah, Managing Director and Global Head of Cleantech Coverage at Standard Chartered. “Investment growth has been relatively flat since 2015. So the question is how do we accelerate this?”

One of the key challenges that renewable energy faces is intermittency. Renewable energy plants are not base load plants unlike thermal generation units. The sun doesn’t shine at night, and the wind doesn’t always blow. The result is intermittency and variability that most power grids were not built to sustain.

So far, the market has converged around lithium-ion batteries, which control more than 90 per cent of the global grid battery storage market.6 Large-scale lithium-ion batteries and mobile battery containers enable greater grid flexibility, while small-scale batteries are used for rural electrification in emerging markets, where they are paired with solar panels to run appliances and light buildings. Over the next thirty years, around 1,400GW of batteries will be added to the global power system to better harness and deploy excess capacity.7 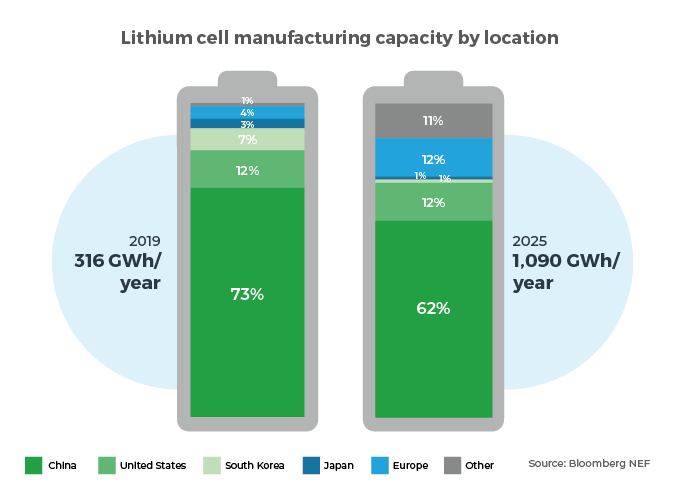 When it comes to new energy technologies, Europe typically leads nascent technologies, especially when subsidies are required for commercialization. On the other hand, Asia tends to take the lead once costs come down and manufacturing gains scale. Right now, Asia is very much the hub for battery production. Much of that is led by companies in China and Korea, where Standard Chartered worked with LG Chemicals on a green bond to finance their battery capex.

“We will definitely play a role in financing new opportunities like this,” says Steven Cranwell, Global Head of Commercial Real Estate and Industry Groups at Standard Chartered. “We’ve been involved in renewable energy since 2007. Over the next four years, we’re committed to providing USD35 billion of project financing services, M&A advisory and debt structuring services for renewables and clean-tech projects.”

The outlook for wind and solar

While the adoption of relatively new technologies is crucial for the renewable energy transition, even on a standalone basis, the outlook for solar and wind remains positive.

“Renewables remain a huge opportunity, especially in emerging markets like India where energy demand is increasing and seven per cent of the population still lacks access to power,” Sujay says. “Last year, we worked with Adani Green Energy to launch the first-ever investment-grade bond from India’s renewable energy sector. The response from blue-chip international investors and asset managers was extremely positive.”

While economic headwinds and supply chain disruptions stemming from Covid-19 have wiped out forecast growth in newly commissioned wind and solar projects for 2020, most of that will be delayed, not cancelled. In fact, several emerging markets have already announced new projects.

“While it’s physically not possible to continue the construction of some projects right now because of the pandemic, I don’t see any significant changes” Sujay says. “Very few of these projects will end up getting cancelled, instead they will be completed in 2021. Furthermore, we haven't seen a significant slowdown for project financing in this sector.” 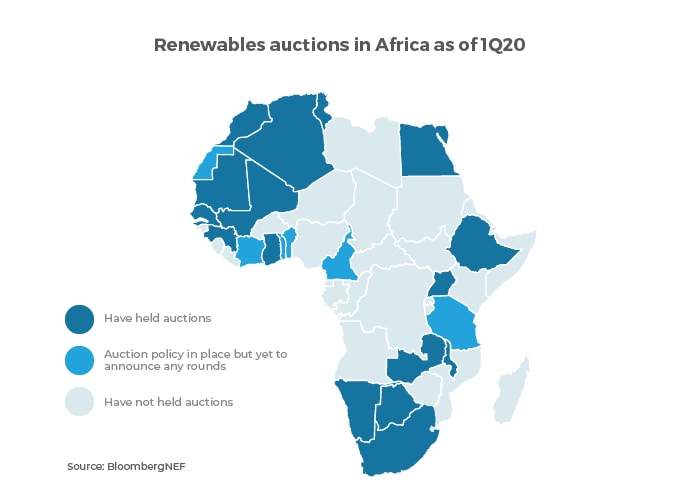 In Australia, for instance, construction on a 1,200MW wind farm that was approved in Queensland in February could start at the end of this year8, while a mega project in the Pilbara region with up to 15GW of wind and solar capacity inched closer to approval in May.9 In April, Vestas won 67MW worth of turbine orders for two wind farms in Vietnam10 – the same month the government passed its second Feed-in-Tariff scheme for solar projects as part of its plan to achieve 20 per cent of the nation’s power from renewable energy by 2030.11 And Malaysia will open a tender for a 1.4GW solar project this year.12 Meanwhile, more than a dozen countries across the continent held auctions in 1Q20.13

While the outlook for wind and solar remains bright, government focus is shifting to the new phase of growth in the journey of combating climate change. Technologies like green hydrogen and carbon capture will play a key role going forward. Indeed, analysis of recent green stimulus packages suggest that USD40 billion has already been announced, the bulk of which will go towards technologies including electric vehicles and hydrogen. While the promised investments in green projects and technologies are relatively small thus far, the global cry for more is growing as people recognize the current crisis as a once-in-a-generation opportunity to accelerate the global energy transition and embrace a low-carbon agenda.