This is to inform that by clicking on the hyperlink, you will be leaving sc.com/sg and entering a website operated by other parties.

Thank you for visiting www.sc.com/sg

Tell us who you are

How can we help you today?

What kind of loan are you looking for?

The Insider’s Guide to Luxury Living

Fine dining in Asia is undergoing a transformation, exposing diners to a new yet authentic taste of the region thanks to the rise in farm-to-table dining experiences. Renowned food critic Evelyn Chen has recently been on a gastronomic tour of duty, revealing the very best of Asia’s latest dining trend.

Farm-to-table dining may be nothing new, at least not in Australia, with its bounty of fresh produce, but in Asia, where imported luxury ingredients such as foie gras, lobster, caviar and truffle tend to take up prime space in fine-dining menus, the farm-to-fork movement was, until very recently, an unlikely cause for gastronomic greatness. Yet, the sap of this counter-culture is slowly bleeding into the veins of Asia’s fine dining scene much to the delight of discerning diners across the region.

My earliest taste of Asian terroir took place in Alila Ubud, Bali, about six years ago. At a time when ingredients from the West were perceived to be the best, then Dutch executive chef Eelke Plasmeijer had successfully led an unusual initiative to source all ingredients locally. His amuse-bouche alone, “3x tomatoes”, showcasing local tomatoes, was a revelation – chilled Bloody Mary sorbet spiked with local red peppers met with the warm embrace of an intensely savoury essence of tomato consommé served with semi-dried tomatoes.

Today, you will find Plasmeijer at Locavore, a modern-European eatery in Ubud, Bali, which he co-founded in 2013. Staying true to its name, almost 100 per cent of the ingredients are sourced from within Indonesia (80 per cent from Bali itself). For proof, look no further than the signature dish of “Into the Sawah” from his seven-course tasting menu. Meaning “into the rice fields”, the dish showcases everything that swims, lives and grows in and around the Ubud rice fields: Balinese heritage rice, a disc of slow-cooked duck egg yolk, snails, floss from frog legs as well as powder made from fern tips and wild chilli blossom. 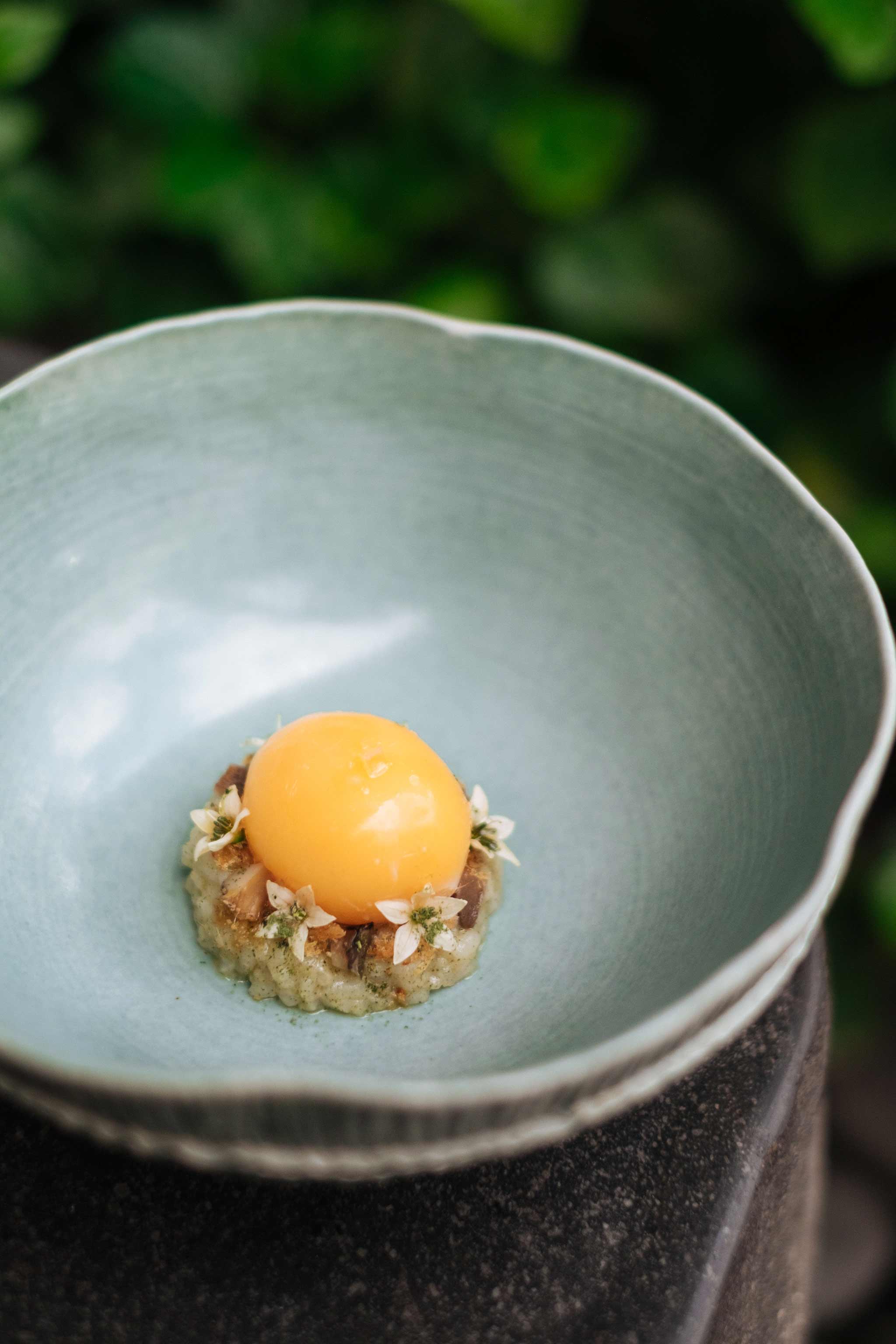 Plasmeijer is not the only chef in Asia tapping the local bounty. Another is Han Li Guang, who snagged a Michelin star for his four-year-old Restaurant Labyrinth (“Labyrinth”), Singapore, in last year’s sophomore edition of the Michelin Guide and again this year.

His 11-course “Homage to my Singapore” tasting menu pays tribute to the little-known terroir of the city with a wanton skin tartlet of shelled clams fished from a local kelong (kelong refers to an offshore fish farm) arrived with the congealed cooking liquid of the shellfish layered with sautéed wild spinach and homemade XO sauce, reflecting the chef’s newfound adoration for plump local molluscs.

If you think the little red dot has no farms to speak of, I recommend you tuck into Han’s take on rojak, a local street food of fruit and vegetable salad doused in a sweet and sour sauce. On the plate, you will discover about 10 different types of locally-farmed vegetables – among them cat whiskers, baby star fruit and white pea flower – served alongside a scoop of ice-cream made from market-procured cempedak and jackfruit, doused in a dressing concocted with fermented shrimp paste and naturally acidic stingless bee’s honey from nearby Batam, Indonesia. This dish alone is a revelation of my city’s under-the-radar bounty.

A four-hour flight  from the Lion City, Hong Kong’s glorious seafood is also having a moment. At the Michelin-starred VEA perched on the 30th floor of an office tower in Wellington Street, executive chef Vicky Cheng is on a mission to offer diners a connection to his motherland by showcasing seasonal local seafood and indigenous Chinese ingredients with a uniquely French savoir faire. His Instagram feed (@chefvickycheng) shows him pairing local threadfin fish (also named ma-yau fish in Cantonese) with fermented cabbage for a Szechuan-inspired dish one day, and locally caught double-shelled juvenile mud crab matched with raw sea urchin, Chinese caviar and risotto the next.

Cheng’s most cutting-edge signature dish of crispy sea cucumber remains a perennial favourite on his bi-weekly changing eight-course Chinese x French tasting menu. Unlike any sea cucumber I’ve savoured, this one comes roasted with a crisp façade and stuffed with the mousseline of a seasonally changing local seafood, be it local flowery crab, lobster or king prawn, served alongside green asparagus from Provence, France, and a fine mist of 22-year-old Shaoxing wine. Just reminiscing this alone makes my mouth water.

Over in Japan, no one does locavorism quite as luxuriously as Hoshinoya Tokyo. The 17-storey, 84-room tower ryokan at Otemachi boasts an underground restaurant, aptly named Hoshinoya Tokyo Dining, which takes residency in the building’s sprawling basement but offers no more than 10 tables, six of which are housed in minimalist tatami-matted private rooms. Open to hotel guests only and at dinner exclusively, its nine-course degustation menu by Noriyuki Hamada, the Bronze winner of the 2013 Bocuse d’Or World Finale, is expressed as an edible piece of art, one that conveys the intricacies of Japanese fish seasonality with the nuances of French cooking techniques. 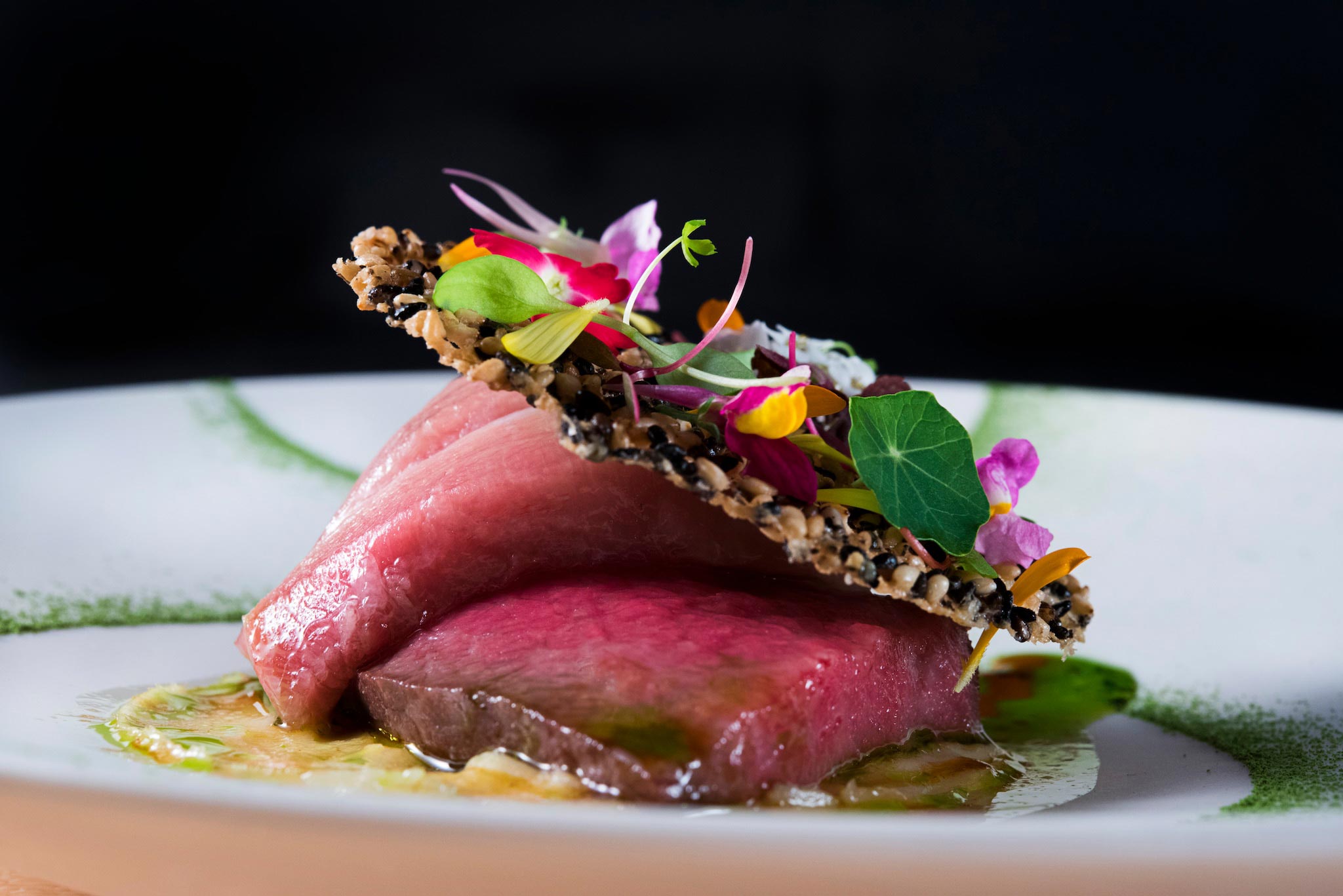 At dinner each night, Hamada presents his seasonally changing menu headlined by fish, fish and more fish. In summer this year, ayu from Kanazawa made an appearance at my exquisite dinner, flanked by cucumber strips and a pillow of buttery mashed potatoes. Only available from June to August, the river fish was slow-cooked in oil for six hours so that the entire fish – including its deliciously bitter innards and bones – was edible and nothing wasted.

But Hamada’s appreciation for Japanese terroir goes well beyond fish to embrace local vegetables and fruits. At the height of its seasonality from June to August, the dangerously juicy peach from Yamanashi Prefecture is served as a compote doused in a riveting sabayon sauce flavoured with kijoshu (fortified sweet sake) alongside a scoop of kijoshu ice cream and a pool of sakuranbo cherry sauce.

For all its transcendence, the meal is available at just 18,000 yen (before taxes and service charge) but you would need to stay a night in the ryokan for a taste of chef’s labour. That is but a small price to pay for an experience that you are unlikely to forget.