One of the primary findings from the recent China investor survey conducted with Funds Europe and Standard Chartered was that Chinese funds have increasingly become a long-term strategy for international investors.

“Our report highlighted that there is optimism that China may lead the world economy out of this slowdown. China GDP grew 2.3% YoY in 2020 (the only major economy globally to show positive GDP) while the global growth was -4.2%. China is expected to continue to lead the world's economic recovery in 2021.”

Standard Chartered Research expects the GDP growth in China will accelerate to 8% in 2021 and the global GDP growth will bounce back to 4.8% in 2021. In terms of difference in yield, according to the survey, the accumulative rate of return for China government, policy and credit bonds in the past five years are 23.3% and 25% respectively, compared to 13.4% globally.

But according to Kellaway, the main driver has been the ease of access to the onshore and offshore markets and the continuous improvement of schemes like Stock Connect and Bond Connect, cited by as many as 69% of survey respondents.

“Speed and ease of account opening have been longstanding priorities for foreign investors wishing to increase their exposure to China,” says Kellaway. 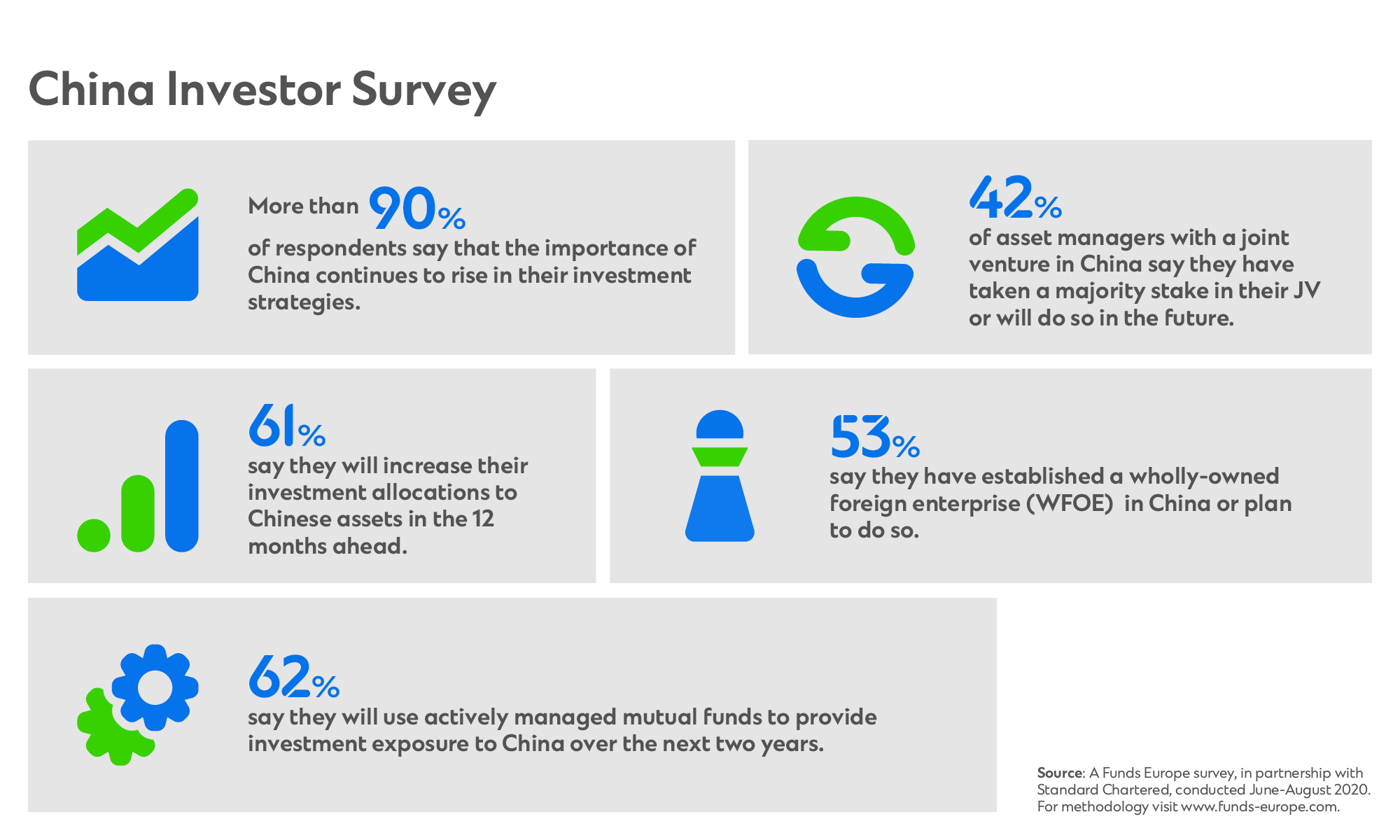 Registration, quota approval and account opening procedures have taken several months in the past but in order to attract more foreign investors, Chinese authorities have made changes to the Qualified Foreign Institutional Investor (QFII) and Renminbi Qualified Foreign Institutional Investor (RQFII) rules that became effective 1 November 2020 and have shortened licence approval turnaround time from months to under 10 business days.

Meanwhile, the Stock Connect and Bond Connect schemes have been further enhanced through e-filing systems and electronic account application capability to make them even more investor-friendly, says Kellaway.

Consequently, ease of access is less of a concern for investors and was cited by just 11% of survey respondents as a priority area. However, this is not to say that further enhancements will not be necessary to ensure China’s continued growth.

“Further relaxing foreign investors’ access to China bond market is key,” says Kellaway. Aligning foreign access to both the China interbank bond market and the exchange bond market, allowing registration to be filled at legal entity level instead of product level, and introducing a multi-tier custody structure with a nominee concept are enhancements that will not only simplify the foreign investors’ application process, but also widen investment opportunities and align with the international practice,” he says.

FX market reforms, for example further expanding the scope of eligible participants in the domestic FX market, and gradually relaxing the restriction for both domestic and foreign companies or investors to conduct CNY trades, will lead to a more mature exchange rate market and lay the ground for even deepened capital account opening.

During 2020, foreign investors snapped up more than RMB1 trillion worth of stocks and bonds in China market, says Kellaway. On the equities side, net inflows through Northbound trading of the China-Hong Kong Stock Connect scheme for 2020 exceeded $32 billion, nearly double the net buy amount as of the end of 1H 2020. Total inflows to China bond market were RMB163 billion in December 2020, the second highest in history. Inflows hit another record in January 2021 with foreign bond inflows of RMB223 billion.

Participation in China’s bond and equities market has been broadly international with investors from Asia, Europe and the Americas all active, says Kellaway. On Bond Connect, most investors are from the US followed by Hong Kong and the UK. Among Standard Chartered’s client base, Asia investors have been particularly active with Taiwan, Japan and Singapore accounting for 40%, 21% and 10% respectively of market share in terms of number of funds or investors from these jurisdictions signed up through Standard Chartered.

US investors are also the most active participants in China’s equities market. But one area where the survey shows a clear US predominance is the wholly foreign owned enterprise (WFOE) space, says Kellaway. “Since the 51% cap on foreign ownership of investment firms was removed in April 2020, BlackRock, Neuberger Berman and Fidelity have all filed applications to establish wholly owned mutual fund subsidiaries in China. Meanwhile various securities firms, such as Morgan Stanley and Goldman Sachs have increased their shareholdings in their existing China securities company joint ventures.”

When it comes to the asset classes most likely to be in demand in 2021, fixed income is still an area relatively light on foreign ownership and where there is likely to be considerable growth potential says Kellaway. “China’s bond market is the second largest in the world but foreign ownership is materially lower than other SDR currencies. With less than 3% of total CIBM assets in foreign ownership, there is significant opportunity for this to grow further.”

From an equity perspective, there is an increasing focus on technology and technology-related stocks, says Kellaway. “China’s progress in terms of both the number of companies it boasts within the world’s top 100 and its growing number of unicorns has been significant over the past few years. It has seen a 67% growth in its number of companies in the world top 100 over the past three years alone, whilst outside of the US, it has almost 1.5 times as many unicorns in the top 100 as Europe and the rest of the world combined.”

The development of the ChiNext market has been impressive too, contributing to a near 10 year high in IPO volume and value – approximately RMB 470 billion was raised from nearly 400 IPOs on China’s A-Shares market in 2020. At the end of 2020, the ChiNext Index, tracking China's NASDAQ-style board of growth enterprises, was up nearly 65%, compared to 44% increase in Nasdaq Composite index.

The survey also showed a high demand for active funds in China. This is partly due to the macro environment in the country, says Kellaway. “As China’s trade surplus gradually narrows and the vertiginous rates of growth delivered by some Chinese companies revert to more moderate levels, the opportunities for asset managers that are skilled at stock-picking will become increasingly important,” he says.

There have also been attractive alpha opportunities in China versus other emerging markets. At the end of 2020, the Shanghai Composite Index was up approximately 13%, compared to the beginning of 2020. “We understand that active managers in China have delivered more than 6% excess returns annually on average in the past five years, which have outperformed the benchmark and some of their peers in the emerging world,” says Kellaway.

Based on the survey’s findings, Kellaway expects that a shifting in allocation out of money market funds into actively managed equity funds will be accompanied by a contraction in investors using private market strategies, either direct investment or via privately managed funds, over the coming 24 months. “Some 60% of respondents indicated that they or their clients invest via private markets currently, but this figure will fall to 24% within two years.”